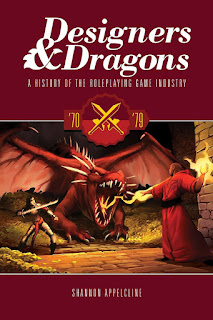 Although I’m only halfway through reading it, I have been totally blow-away by Designers & Dragons: A History of the Roleplaying Game Industry by Shannon Appelcline. If you have any interest in this industry, or the companies within it, then I heartily recommend checking it out.

I first came across Designers & Dragons while looking for something else on DriveThruRPG. I had never previously heard of the author or the work. Intrigued, I went ahead and ordered Volume 2. I’ll explain why I started with that volume in a second. In truth, I didn’t expect too much from the book, maybe a few good facts or anecdotes. Instead, what I got was an impressively researched, incredibly comprehensive, and very well-written history of all of the major (and many of the minor) companies that have published role-playing games in the first forty years of the industry.

The work is broken into four volumes, each one covering the companies that began publishing RPGs in the 70s, 80s, 90s, and 00s. Each entry tells the complete story of that company from their founding to (in most cases) their folding. Generally, Shannon sticks to the facts, only occasionally offering any personal commentary, which is probably wise considering just how many contentious issues arise in the history. 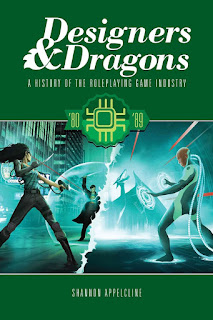 I actually started with Volume 2 because it included several of the companies I was most interested in: Steve Jackson Games, FASA, and Iron Crown Enterprises, for example. In each case, I got something different. For Steve Jackson Games, I had just never read a history of the company, despite it being one of my earliest gaming loves. For FASA I got a very straight account of a company that often has a confusing history. For Iron Crown Enterprises, I finally got the answer to a question I had wondered about for thirty-years. (How did the company get into such dire financial straights right around the time they were supposed to pay me and my mother for our work on MERP: The Grey Mountains?)

I enjoyed Volume 2 so much, that even before I was finished with it, I ordered the other 3 (in hardback no less!). I’ve nearly finished Volume 1 now and found it just as good. In fact, I wish I had read this more straight-forward account of the history of TSR before I read Empires of Imagination (though I think that book is worth reading as well).

The roleplaying game industry is just packed with interesting characters and fascinating stories, and this book has them all. For me though, it has been even more than a great read - it’s been an encouragement. Although I mainly write ‘wargames’, they tend to have a heavy RPG influence, and I very much consider myself a part of this tradition. It’s incredible to see how others have done it, and ponder how I can incorporate those lessons into my own life, work, and creativity.

So, yeah. Designers & Dragons – Highly Recommended.
Posted by joe5mc at 03:32