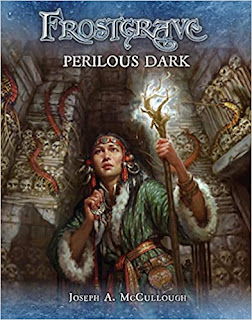 Osprey have just informed me that Frostgrave: Perilous Dark has been nominated for ‘Best Miniature Rules’ at this year’s UK Games Expo (being held online this year). This is an award that Frostgrave (the rulebook) won in 2015, and that Ghost Archipelago lost when it was nominated in 2018.

I honestly believe that Perilous Dark is one of my best pieces of wargame writing, so it is really nice for it to get this recognition.

That said, I’m up against some good competition. I actually read Last Days: Seasons in manuscript form. Ash Baker sent it to me to get my opinion, and, in truth, I thought it was great and basically had nothing to add. Meanwhile, I was actually at Adepticon when Ragnarok was first pitched to Osprey. It’s a cool idea for a game, with some interesting mechanics.

Everyone who attends the convention gets to vote for the winner. I obviously have my favourite, but whatever way it comes out, it’s always nice to get some recognition.