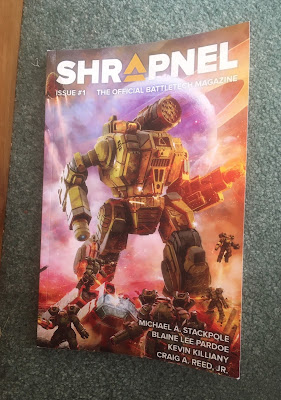 A new quarterly Battletech magazine, print-on-demand, in perfect-bound book format, available on Amazon, even in the UK? I was in!

I may not play Battletech very much these days, and I’m mainly waiting for the new batch of plastic figures to be released before I get serious about painting it again, but gosh, I love the setting and the fiction. And really, that is what this magazine seems to be about.

The short stories mainly come from the familiar names of Battletech fiction. Of the six, I would rate five of them as good or better. My favourite was Tales from the Cracked Canopy: Blind Arrogance by Crag A. Reed, Jr.. While the plot was pretty straightforward, the framing story really gave it extra interest and meaning. Pretty much all of the stories involve the Clans in some way, which isn’t my favourite part of the universe, but I still enjoyed them.

The serialized novel is from ‘big-namer’, Michael A. Stackpole. While I enjoyed this piece well enough, it also left me scratching my head a bit. First because it seems like I had come into the middle of a story – I’m guessing there is a novel that directly proceeds it – but also, I’m just not sure of the point of serializing a novel in today’s market place. Perhaps it is just to have Stackpole’s name on as many issues as possible, but personally, I would have been happier with another short story in its place.

The articles are uniformly short pieces - they are basically news accounts from the universe. I liked them. They served as a nice break between the large pieces of fiction. I especially liked Michael Ciaravella’s Secrets of the Sphere: The Cameron Question. This little piece could be either the basis for a huge narrative or just a footnote if some one wanted to work the idea into a game.

The game features are again short pieces and includes rules for different sniper rifles in the RPG, a unit history, and an intriguing three-way scenario.

The layout is simple, but nice. Personally, I wish they had left out the texture behind the text. Not a major issue, but I think plain white would have been more enjoyable to read. There are a few black and white pieces of artwork scattered throughout, which I think are mostly reuse. Nothing to compare with that great cover though!

It is perhaps odd that an official magazine for a game includes so little game content, but personally, I’m good with that. At any rate, I am already looking forward to the release of Issue 2! A big thumb-up to all involved!