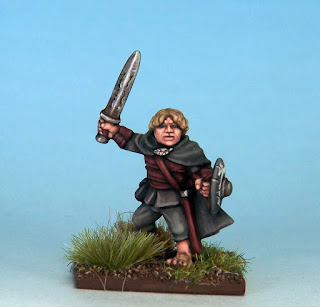 Never let it be said that Osprey doesn't listen to their fans! As one of my last tasks as an Osprey employee, I was asked to create an 'unofficial' Halfling army list for Oathmark.

Officially, there are no Halflings in the Marches, but we know that a lot of players either have the figures, or wanted an excuse to get some!

So, here you go. Since Halflings aren't really warriors by nature, and their settlements are generally small, it's kind of a 'half-list' in relation to the other races. This includes a small, but particular spell list.

As part of the fun, North Star got Mark Copplestone to sculpt a new Halfling hero for the occasion, which you can see here.

You can pick up this guy, and bolster your halfling forces at North Star Military Figures!

I hope it brings some fun to your tabletops!