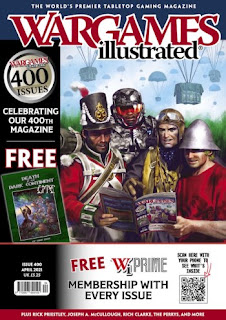 Wargames Illustrated magazine hits a pretty incredible milestone this month with its 400th issue! That's a seriously long run for any magazine, but especially one devoted to such a small hobby! Congratulations to Dan Falconbridge, the current owner, and all who have worked on the magazine over the years.

I have been honoured to appear in those pages on many occasions, and I have another piece in this historic issue.

I was asked by the editors to do a 'Top 10 List', and after giving it some though, I went for my 'Top 10 Wargames Mechanics'.  I figured, if nothing else, it will at least prove controversial!

Anyway, it's a fun packed issue, with lots of looks at the past, a long article from Rick Priestly on major wargame releases of the past thirty years (Frostgrave even gets a mention!), an interview with the Perry twins, a look at Nick Eyrie's Union infantry, and more. In fact, the mag even comes with a free set of rules - Death in the Dark Continent, Lite - as a separate booklet in the bag.

Might be worth checking out! You can order it direct from Wargames Illustrated or from North Star.