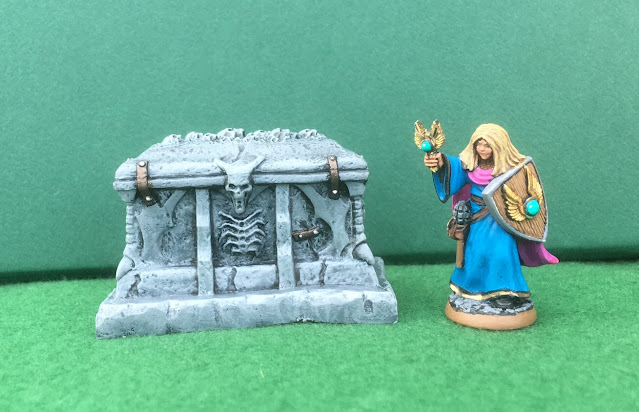 I have been reading Pathfinder for Savage Worlds - which I thankfully purchased before recent RPG events made a lot of fantasy RPG physical core rulebooks temporarily hard to come by! I have been a fan of Savage Worlds since it was released a couple of decades ago (perhaps even earlier as I was also a big fan of Deadlands and The Great Rail Wars, which the system is based on). Meanwhile, I started reading Pathfinder a few years ago. I like the system, but I really like the setting! So, really, the only question is why I didn't pick it up sooner!

Which is all just a long-winded explanation for why I have been in the mood to paint some classic, RPG style fantasy miniatures. Thankfully, I had a small supply of Reaper miniatures tucked away for just such a contingency. 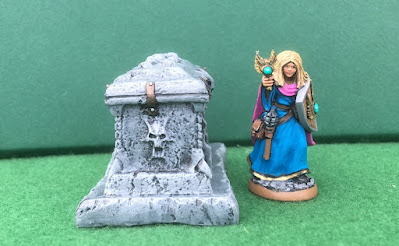 The cleric is a figure that Reaper released for their last Reapercon. Thankfully, Mighty Lancer Games got a small cache of these, and I was able to pick up a few. I really love the simplicity of this figure. She's got her holy symbol, mace, and shield, plus a small bag, and that's basically it. I admit, my colour choices drew heavily on Anna from Frozen. I added a bit of gold trim on the bottom and sleeves of the robe, just to give a bit more visual interest and to tie in with the colours of her holy symbol and shield. This figure was a 'Bones USA' figure, which is a material I haven't worked with much, but I have to say is pretty impressive when it comes to holding detail.

The tomb is a Reaper Bones figure, and it is slightly warped at the bottom (which I suspect is why they aren't making new figure in that material). Still, it's chunky enough to not be that noticeable. It's a pretty neat piece with some nice detail. I especially like the bands, or straps, holding the lid on. As though the straps are going to stop something that can lift a stone lid that heavy!