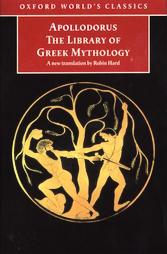 In the last few months, I have once again become very interested in Greek mythology.  Not so much the stories of the gods, but the tales of the heroes, Hercules, Theseus, Jason and the Argonauts, and the like. While doing some research on these topics, I kept encountering references to the library of Apollodorus, a work I had not previously encountered.

So, one day after work, I decided to pop into town and pick up a copy.  Now, most places in the world, you might think it unlikely to find a copy of Apollodorus, but this is Oxford, and thanks to Blackwell’s Bookshop in particular, you’ve got a pretty good shot and finding any classical title you want.

Well, I got the book and have just finished reading it.  My advice, do not read it cover to cover.  There is loads of great stuff in Apollodorus, including summaries of almost all the major Greek Myths.  However, Apollodorus has arranged his book in order by family tree, and it is clear that genealogy is just as important to him as stories. Thus a lot of names get thrown around, during and between narratives. In one notable section, he mentions one king who has fifty sons and another king who has fifty daughters and how they all got married.  He then goes on to list every couple...

Apollodorus is probably a book that every Renaissance Troll should have on his shelf.  It is an invaluable reference tool, and especially nice for comparing different versions of classical Greek Myths, but there is probably not much to be gained by reading it straight through.
Posted by joe5mc at 07:33