The Beacons are Lit! 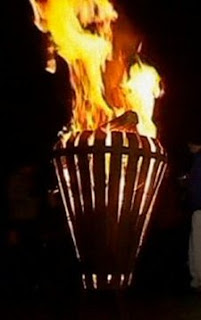 I may be an American, but I’m also a die-hard royalist. While I can understand why some people don’t like the idea of having a monarchy of any sort, I think it would be a tremendous shame to abandon such a historical institution, especially one that gave us all an extra day off work this year. Yes, it is a bit expensive, and allows a few people an unearned life of privilege, but I am sure that this is more than balanced by the tourism it generates, the goodwill it engenders, and the patriotism it brings out.

Yes. Patriotism.  One of the first things most Americans will probably notice if they come and live in England is the noticeable lack of patriotism in day to day life.  The Union Jack, that attractive flag, makes only rare appearances. It doesn’t fly from any houses and even amongst all the government buildings in London it is a rare sight.  Most of the English, most of the time, seem rather indifferent about their country. It is all an act, part of the famous English reserve.

They save it up you see, and only unleash it on special occasions, an occasion like the Diamond Jubilee.  Over the last few days, I have seen a wash of patriotism that has dwarfed even the royal wedding last year.  But British patriotism is very different from the American variety.  In America, we loudly chant U-S-A, almost as an act of defiance.  In Britain, their rare displays of patriotism are invitations.  Through the ties of the Commonwealth, the British invite the whole world to celebrate with them.  The British are a proud people, and they are proud of their history and their position of bringing so much of the world together.

A fantastic example of this can be found in the official song of the Jubilee, ‘Sing’.   While I’m no real fan of pop music, I must admit this is a pretty piece. But what is more interesting to me is its construction.  The job of creating the song was given to Gary Barlow, leader of the band Take That, and generally considered one of Britain’s best current pop music writers.  He enlisted the help of Andrew Lloyd Weber, and the very popular Military Wives choir, and then he travelled to the far corners of the commonwealth to collect sounds.  How wonderful is that? A journey to collect sounds, to bring them together to create something new?

And so the beacons were lit. Thousands of beacons, burning across the United Kingdom and the Commonwealth.  Not signalling danger, like they would have done a thousand years ago, but signalling unity, signalling a proud patriotism.