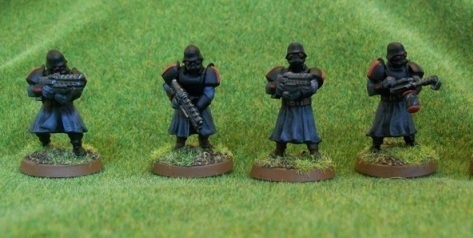 Last year, the relatively new company ‘Wargames Factory’ went through a rather nasty, and rather public, change of ownership. Basically the original owners lost control of the company to their Chinese manufacturer.  I don’t claim to understand exactly what happened, nor did I have any horse in the race.  The unfortunate thing about the whole story is that it overshadowed the miniatures the company was producing at the time.

Wargames Factory miniatures are not the best.  Some of the sculpting is a bit wonky, and the casting tends to be ‘soft’ (the details are not sharp). However, that does not mean all of their miniatures are without value.  I’m a big fan of their fantasy orcs, and I have considered picking up their Ancient Greeks and their skeletons.  However, the only figures I have painted from them recently is this fire-team of sci-fi troopers.

Again, these figure aren’t the best, and I didn’t really have high hopes for them.  I figured I’d just throw some paint on them and use them as generic bad guys.  Well, I threw on some paint, and they came out looking much better than expected.  In a departure from my normal painting style, I decided to go with a gloss black for their armour. I usually hate gloss paint, but in this case, it gave them a nice, sinister, beetle-like appearance.  I’m more than happy with how they came out and intend on painting up a few more teams.  I can definitely see the crew of the Black Moab having a confrontation with these guys in the not too distant future.
Posted by joe5mc at 17:00