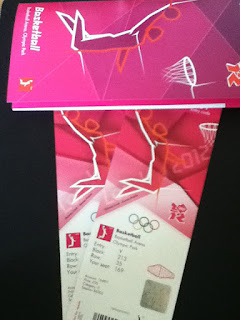 In 1996, my parents took our family to the Olympics in Atlanta, where I got to see baseball, team handball, and track and field.  I have loads of great memories from those days, including the crazy Danish handball supporters, running around in the Olympic fountain, and some of the last real time I spent with my granddad.  Although, I was old enough to appreciate all of the work and money that my parents must have put into that trip, I wasn’t quite yet mature enough.  Now, I am both, and want to thank them for giving me such a treasured memory. I'm sure they'd tell me not to pay it back, but to pass it on.

So, when I found out that the Olympics were coming to London in 2012, I wanted to make sure that my wife got to experience a little of the magic that I did back in 1996. Plus, I wanted another Olympic badge for my cap!

Now I knew I was working with limited time this summer because of various trips, but when the Olympics tickets went up for sale, I was poised.  I requested tickets for four events over two days.  Despite asking for tickets for less popular sports such as team handball and badminton, I was allocated exactly nothing.  I must admit, I was a bit devastated.  I still can’t understand the system of distribution that resulted in me, and so many others, not getting any tickets at all.

So, I waited for the second round of ticket distribution, which was on a first-come, first-serve basis.  On that morning, when I got up early to be ready to pounce, my computer flipped out.  It took me a couple of hours to sort it out, and by then, all the decent tickets on the days I could attend were gone.  Again, I was hurt.

Then, a lifeline. I discovered that you could buy Olympics tickets as part of a ‘package holiday’ with Thomas Cooke; they even had one day packages.  I’d have to buy a hotel room and badly overpay for the tickets, but it was possible.  So, deciding that the money was worth the experience, I went for it.  I could only afford one event, but I knew it would be enough.

I asked for an afternoon session of Women’s basketball, and I got it.  Yesterday, I went to Thomas Cooke and picked up my tickets!  Basketball is right in the Olympic park, so not only am I getting two basketball games, but I'm also going to get the full Olympic experience.