The Day of the Doctor is Coming!

And I’ve got tickets! 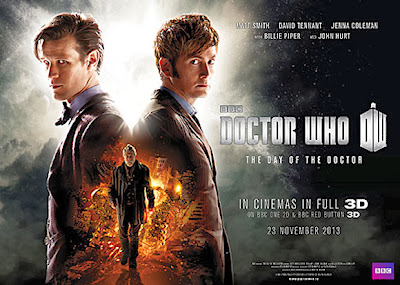 On November 23, Doctor Who is returning to television with tth anniversary special, Day of the Doctor. This will also mark the first multi-Doctor episode of the new era, as both Matt Smith, David Tennant, and ???? will be appearing.
he big, 50

What I only recently discovered is that at the same time the show is airing on television, it will also be playing in selected 3-D movie theatres around the country. I actually found out about this the day after the tickets went on sale. Well, I really lucked out. I checked my local theatre and they actually still had a few tickets left. I got two seats near the middle of the back row.

Maybe it is silly, paying money for something that is going to be free on television, but I’ve been a Doctor Who fan my whole life, and I’ve never gotten the chance to see the Doctor on the big screen. I’m glad I’ve got the chance now. I will also be recording the episode, as I have a feeling it could be a huge, complicated, time-travel, super-self-referential muddle that might need multiple viewings to actually understand.
Posted by joe5mc at 07:30