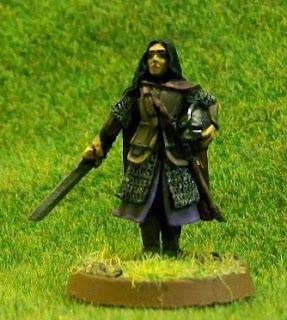 It has been several weeks since the news went out about the Glaurung and the quest for the Nauglamír. Breged and Mandracoth have spent most of their days down in the great archives of Minas Tirith, pouring over maps and the ancient accounts of journeys to the distant lands of Far Harad. There is little enough information, but who knows what scrap might prove valuable.

Then, in the space of two days, two new heroes arrived at the White City, offering their services on the journey. The first was Lady Valetha of Pinnath Gelin. The daughter of minor nobility, Valetha grew up in a world of culture and privilege, but after her betrothed was killed by bandits less than a week before their marriage, she devoted her life to the martial arts. Seven years later, she is undoubtedly the best swordswoman in the kingdom. Although she would never say it, most assume she is still running away from her pain.

Breged initially had reservations about taking a woman on the voyage, because of the potential effect on a ship full of men, but Mandracoth convinced him that Valetha was too great an asset to leave behind. 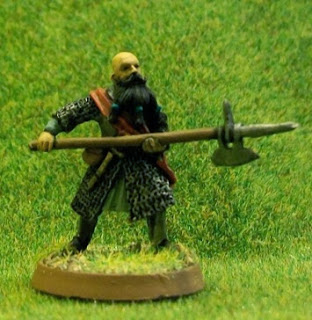 Breged had no concerns about the next volunteer, Darcaven of Lossarnach. A warrior known for his great courage and his great appetites, Darcaven has fought in many battles against the growing forces of Mordor. Unfortunately, his acceptance into the crew has caused friction between Breged and his cousin Boromir, who was not pleased to lose such a warrior from the defense of the city. In the end, the choice belonged to Darcaven, and he chose to cast his lot with the crew of the Glaurung.

The GW Lord of the Rings line contains many great figures, but very few women. Thankfully, they have done several versions of Eowyn, and I chose one of these for Lady Valetha. Wanting to get her as far away from Eowyn as possible, I gave her jet black hair and purple skirts. Also, following the advice of my first figure painting teacher (whose name is sadly long forgotten), I painted her lips. I never do this with male figures, and it does help make the figure a bit more feminine, which is especially important for fully armoured figures. I’m very happy with the figure.

The figure for Darcaven comes from the Axemen of Lossarnach pack and is thus less detailed. Although I like the figure and the simple paint job I gave it, I think the less detail meant he didn’t come with as much back story. We’ll see if we learn more about him during the campaign.

Both of these figures were painted before I broke my arm and wrist. Unfortunately, I haven’t touched a paint brush since. I am starting to get movement back to my fingers however and I’m hopeful it won’t be too long.