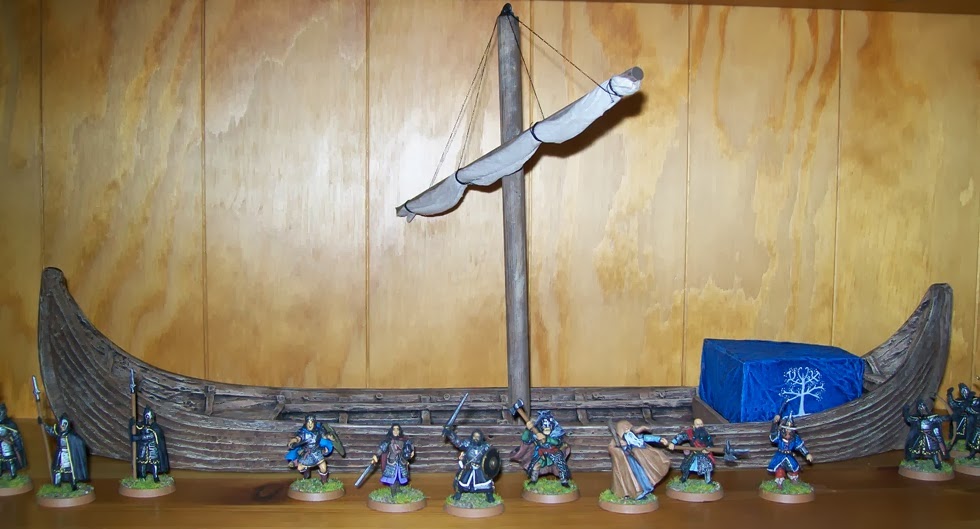 Many months have passed since Denethor tasked his nephew Breged with the recovery of the ancient necklace known as The Nauglamír. Since then, the shipwrights of Dol Amroth have been labouring away, building a ship tough enough to carry a determined group of adventures across the sea and back. They are nearly finished. 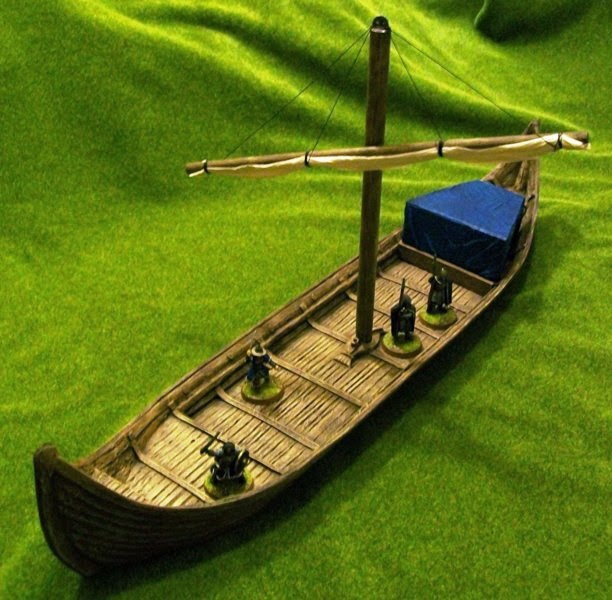 With the days growing short, Breged has assembled his volunteers from the Tower Guard, but of the eight heroes his wish to recruit (not counting himself and Mandracoth), he has so far, only found five.

A few weeks ago, I received the body of the Glaurung in the form of a resin Viking ship from Gripping Beast. Since then, I have been doing a bit of painting and simple construction to try and make the ship look more like the Angus McBride ship on the cover of  the Merp book Thieves of Tharbad. (See In TheShipyards of Dol Amroth).

I started work by constructing the little cloth tent on the back of the ship. This is a non-permanent fixture that can be taken down if the ship enters combat. Most of the time, it will serve the double purpose of protecting the perishable supplies from the elements and giving Valetha, the sole female member of the crew, a small bit of privacy. The tent is made out of bits of card, measured to fit within the ship. I then covered the card with a paper towel soaked in a mixture of water and white glue, to try and give it the appearance of fabric. I painted it blue to give the ship a nice splash of colour and because it is the colour of Dol Amroth.  It still seemed a bit plain, so I painted the White Tree of Gondor on either side. I’m pretty proud of this. I don’t consider myself much of a free-hand painter, but I think the trees came out rather nice. 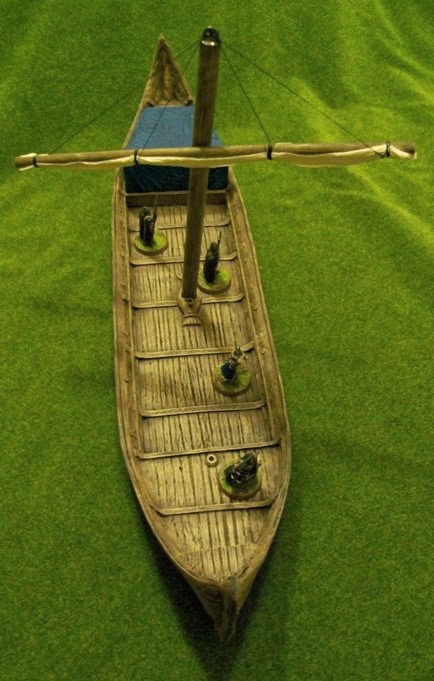 Having completed that, I painted the main body of the ship. This was a simple job of base coating it a deep brown and then dry brushing 3 or 4 lighter shades over it. Thankfully, the resin model had enough detail that the dry brushing gave really good results, and the painting proved really easy. The only non-wooden detail to pick out was the ironwork on the two hatches at either end, which I painted black.

Originally, I had attended to leave the ship without a mast, as I thought it might interfere with play. However, the ship looked a bit naked without it, so I changed my mind. Using the Angus McBride ship as a guide, I built a simple mast and sail. The mast and crossbeam are doweling bought at an art store. The height of the mast was measured so that the ship would fit into the shelf where I plan to keep it. I attached the crossbeam by drilling a whole in both it and the mast and using a bit of paperclip to pin them together for a stronger bond when glued.

I spent a good deal of time wondering what to do with the top of the mast, as I wanted something to which I could connect rigging. In the end, I found a metal axe in my miniature bits that had a round blade with two holes in it. I think it is some kind of ancient design, but I can’t remember. I cut off the handle, filed down the back and glued it to the top of the mast with the blade sticking up and the two holes underneath. 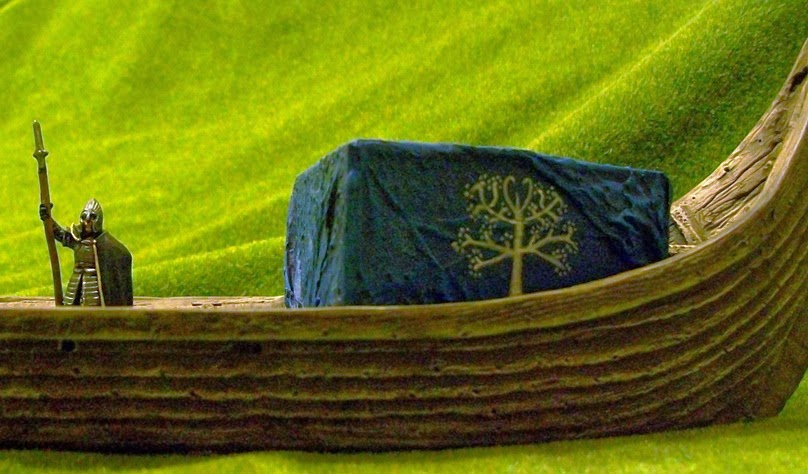 to create the sail, I cut a piece of paper towel, folded it back and forth into a thin line, then soaked it in tinted glue-water. After squeezing out most of the water, I attached the towel to the crossbar. I did this by simply wrapping black thread around it in four places and tying of the end of the thread around the axe-head atop the mast. A couple of drops of superglue ensured it should all stay put. Then, using my fingers, I pulled a little more shape out of the sail and left it to dry. 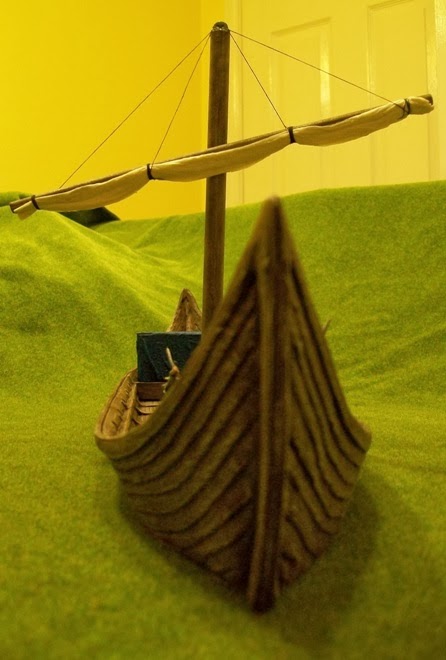 I’ve got to say, the sail is the part of which I am most proud. I wanted something that looked like the Angus McBride ship, but was quite simple with only a minimum of rigging. I think it looks great, but shouldn’t get in the way too much. That said, I have not actually attached the mast to the ship. I may at some future date, but for now, it stays put well enough with a little strategically placed blue tack.

So, there she is, The Glaurung. I have been toying with the idea of adding a flag or banner streaming off the mast, but I might not.

The ship proved extremely difficult to photograph. It’s just a little too large and awkward to get a good shot of the whole thing without including lots of household furniture. I took a lot of shots, but probably the best one for seeing the whole ship is the one of it sitting on the shelf. (Yes, my very understanding wife agreed to let me keep it on the bookshelf in the living room).

I actually thought making the ship would be a pain. It was not. Starting with the great base from Gripping Beast, I only had to add a few simple additions, and I think I’ve got a great looking Glaurung. Now I just need to finish assembling the crew and get ready to sail. 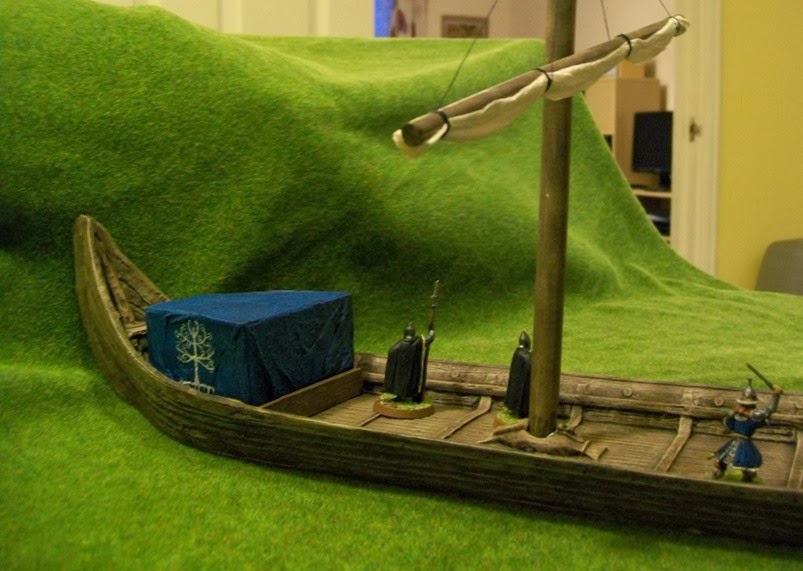