Strider (or Painting is Still Possible!) 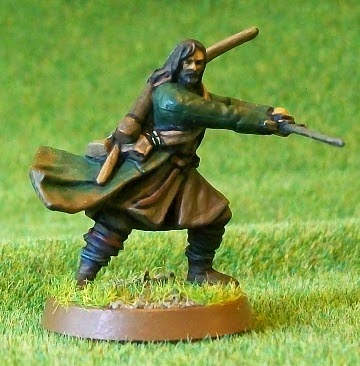 Here it is, proof that there is still painting after fatherhood! I took four or five weeks, but I have painted my first miniature since the birth of my daughter! Actually, I’ve also painted an orc and finished up one other figure that was half-painted, so really, I’m not doing too bad. The key is thinking ahead. Whereas before, I could pretty much paint whenever the whim struck, now I’ve got to think – next time she’s asleep, I’m busting out the paints. It does mean that painting is now, even more, in competition with all of my other hobbies, but that is just life as a parent.

So, here is Strider. This figure comes from Games Workshop's plastic Fellowship, originally released as part of their Mines of Moria box set. This is the only version of they made of the Fellowship that they claim is not based on the actors in the movies. That statement is more accurate for some of the characters than other, but regardless, I think this is a terrific version of The Dúnadan, especially considering that it is plastic. The only real flaw is the unfortunate connection where the hair merges into his bow. This is minor, though, and somewhat offset by the wonderful sense of movement conveyed. 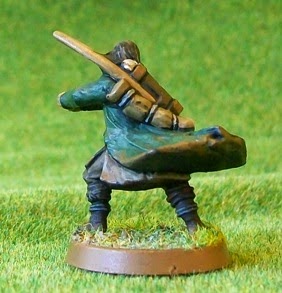 The pose is very unusual; he appears to be just finishing a baseball swing, and I love the way his coat is swishing around behind him.

I gave him a very drab and dirty paint job as I think befits a ranger, using greens and browns nearly exclusively. I did also mix just a bit of grey into his hair, as he isn’t a young man anymore.

A really fun figure to paint, and I’m looking forward to working on the rest of the Fellowship...when I get the chance.