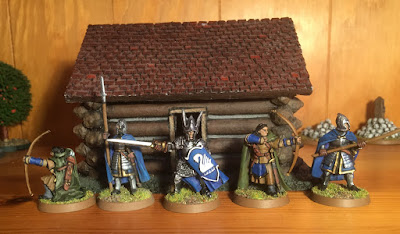 Yesterday, I decided to close up the computer early and go play some Middle-Earth Battle Companies. (That’s like work, right – researching the competition…)

Because it had been so long since me and my opponent, D, had played, and since the new edition of the rules has just been released, we decided to start our companies over. Which was just as well as Belagus, my brave knight of Dol Amroth got badly battered in our last meet-up.

So, once again it was my warriors of Dol Amroth versus his Uruk-hai. I had five guys: my knight, two men-at-arms, and two archers. He had seven Uruks, including two archers. This time I decided to try something a little different and designated one of my archers (brave Eldamir) as one of the heroes.

We ended up playing three games in about three hours. In the first game, I was tasked with defending a hill. I didn’t do a very good job... Although Eldamir shot down one Uruk and Belagus slayed another, we were quickly overrun and routed. Thankfully everyone survived unscathed on my side. Things were a little worse for victorious D when he found out his leader would miss the next game.

Ironically, the scenario for the second game gave the victory to whoever’s leader killed the most enemies. D had to designate a stand-in. The game got off to a great start for me as my two archers combined to take out D’s new leader. All I needed for the win was for Belagus to slay one Uruk. It didn’t happen. Belagus got cut down by the first orc who crossed his path. Sigh. The game was a quick, bloody, draw. Again, all of my figures survived the fight. D, however, left one of his archers on the field.

So onto the third game. D got his leader back, but was still down to six guys. I was still on five, battered, bruised, and somewhat dispirited Gondorians. The win in the third scenario would go to whoever had the most guys on the centre objective at the end of the game. The twist was that all of the figures entered the table on random sides. This led to the strange situation where Belagus and my two archers entered right behind a trio of Uruks. A sharp, bloody fight ensued. For the first time Belagus actually showed some fight, cutting down a pair of Uruks, before being dragged down himself. Eldamir also took down an Uruk before falling. At the end of the game, I had one man-at-arms standing atop the objective being charged by a pair of Uruks. However, just as they closed in, the game ended. Leaving the field and the victory to me.

The win was touched with a bit of melancholy (as all tales of Middle-Earth are). For brave Eldamir fell in that battle, never again to see the ships sail from Dol Amroth. (Stupid snake-eyes on the survival roll!). Belagus also suffered a grievous wound. I rolled wounded arm, but as this would force me to get a different figure, D graciously allowed me to spend a point of Influence to change this to a leg wound instead.

It wasn’t all bad in the post-game though. One of my men-at-arms (who really did most of the work during the three games) was promoted to a hero! Which is great if for no other reason than heroes tend to live longer. Belagus also gained a point of Might, which is super useful.

Finally, with 8 Influence to spend, I decided that a Wandering Elf would join the party. This replaces my lost archer and my lost hero, and keeps my Battle Company as a small, elite force for the moment.

So, three games: a win, a loss, and a draw. More importantly, a fun day at the office! Also, it leaves me with a bit of homework as I have an elf to paint!

Unfortunately, I didn’t have my camera, so you’ll have to settle for a pre-game ‘team shot’.
Posted by joe5mc at 04:16