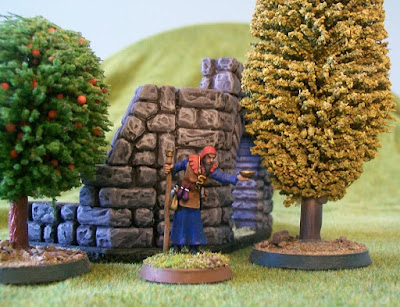 My Ghost Archipelago crew was nearly done, but I just couldn’t decide on the last figure. I needed a ‘standard crewman’ to round it out, but I just couldn’t find a figure that appealed at the moment. I could have used one of the plastic crewmen, but since the rest of the crew were metal, I kind of wanted a ‘full metal crew’.

In the meantime, I had this figure in my painting queue. He’s actually the cultist apothecary from the Frostgrave range. As I picked him up to paint, I realized he had a serpent pendant…  It occurred to me that I was letting the game rules limit my thinking. Just because I needed a ‘standard crewman’ didn’t mean the figure had to look like a crewman. Instead, I realized what my crew really needed was a translator to help the snake-men in the party communicate with everyone else. He also does double-duty as the crew's healer.

I haven’t given him a name yet, but here he is! The final member of my crew.

Interestingly, I realized with the way the rules work, this guy is functionally immortal. Since standard crewman don’t roll for survival, since they can be freely replaced anyway, this guy will always come back no matter what happens to him. I think that might be part of his story, the guy who keeps getting wounded, but always survives. He wiry, but he’s tough!