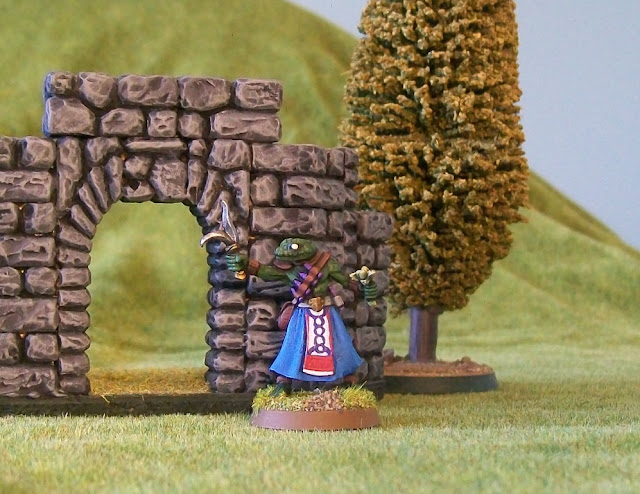 I’m continuing my work on Collandra’s new crew for Ghost Archipelago, and here is her new Warden. I knew I wanted to paint this figure as soon as I saw the digital render. He’s actually the snake-man herbalist, but he looks like he’s casting a spell to me!

I made him a Vine Warden mainly because he’s holding a plant, but also because I really like some of the Vine Warden spells. Sliss will be starting with Warp Weapon, Snare, Bark, and Amphibious; which I think is a nice mix of attack, enhancement, and utility.

He got the blue skirts as blue is the unifying colour of the whole crew. I made several attempts to paint his…what do you call a cloth that hangs in front like that? Does it have an name? Well, I made several attempts to paint it following the pattern sculpted on it, but this detail proved just too fine for my slowly fading eyesight. So, I just did a little free-hand. When doing the artist references for the snake-men, I said that their designs usually incorporated a lot of curves, so that’s what I went with.

This guy got the benefit of the new, brush-on varnish I’m using. I am still surprised at how much better this does at preserving the actual colour painted onto the mini. It does leave the figure with just a tiny bit of shine, but not enough to bother me.