Creating a Ranger (for Rangers of Shadow Deep) 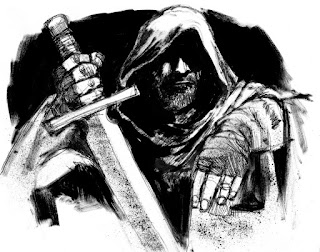 One of my goals when I started work on Rangers of Shadow Deep was to make the process of creating a Ranger closer in feel to designing a character for a role-playing game than to the methods commonly seen in wargames. I believe that the time you spend working on a character, and the choices you are required to make during the process, leads to a greater attachment to that character. The greater the attachment, the more the player cares about developing that character’s story and the more they care about their ultimate fate.

Today, I am going to quickly run through how to create a Ranger.

In truth, I would advise most players to start with a miniature. This is your chance to use pretty much whatever miniature you want to be your hero. In my case, I am drawn to the traditional ‘ranger’ aesthetic of rough traveling gear, long cloaks, and plenty of weapons. A figure that looks like it can move fast, but strike hard. For that reason, I’ve decided to use the miniature photographed above (which is from the Frostgrave line). Don’t let the name of the game worry you too much though. If you would rather have your hero be a knight in shining armour or a crusty old mage, go for it. The rules are open enough to allow it. So, pick your favourite mini that you’ve never gotten to use, and let it guide you through the creation process.

I’ve named my ranger Aelwyn, mainly because it has a bit of Tolkien feel to it. 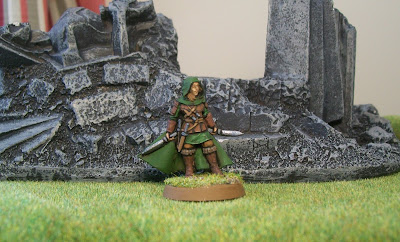 Once you’ve got your mini, and your name, you now have to decide how to spend your ‘Build Points’. Every ranger gets 10 Build Points and can use these points to improve their stats, buy Heroic Abilities and Spells, gain skills, and increase their Base Recruitment Points total. Some of these categories have limitations on how many points you can spend. Let’s start with Stats.

People who have played Frostgrave or Ghost Archipelago will be pretty familiar with the basic stats of a figure in Rangers of Shadow Deep, so I won’t go into the specifics here. For now, it is enough to know that each ranger starts with the following base stats.

A player can exchange up to a maximum of 3 Build Points to increase the ranger’s stats (except Armour) on a one for one basis. However, you may only increase each stat once. I see Aelwyn as lightning quick, and a tough hand-to-hand fighter, so I increased her Move to 7 and her Fight to +3. I could spend one more, but I suspect I’ll want that build point later, so I’ll stop there.

I don’t see Aelwyn as a spellcaster, so I’m going to ignore those and concentrate on the Heroic Abilities. I’m allowed to spend up to 5 Build Points (of my remaining 8) to buy Heroic Abilities at the cost of 1BP per HA. I decide to take 4 Heroic Abilities that fit with my vision of Aelwyn as the close-in fighter: Frenzied Attack, Powerful Blow, Parry, and Hand of Fate. I’ll leave it to your imagination for the moment as to what exactly those do during a game.

We now move onto skills. There are 15 different skills in the game. Obviously not all of these skills will come up in every game, but all of them will be useful at some point. For every Build Point a player spends on skills, they may increase 8 skills by +1. So, your maximum starting bonus in any given skill will be equal to the Build Points you spend. After much agonizing, I decided to spend 2BP on skills, so she ends up with the following skills: Ancient Lore +1, Armoury +2, Climb +2, Navigation +1, Perception +2, Stealth +2, Survival +2, Swim +2, Track +2.

This leaves me with 2 Build Points remaining. The final category is Recruitment Points. These are the points you will use to assemble your companions when your ranger sets off on a mission. Each ranger starts with 100 and each build point you spend adds +10. So, spending my last two BP gives Aelywn a 120 Recruitment Points. I’ll go through exactly how these are spent, and what Aelywn chooses to do with them next time.

The truth is, you are probably going to find that you don’t have quite enough BPs to do everything you want. That is deliberate. Remember these are starting rangers. Over the course of a campaign, you’ll gain levels, and you’ll be able to improve all of these areas. I really wanted to give Aelywn more skills and went back and forth on spending 2 BP on Recruitment Points. We’ll see how that works out.

My last task in getting Aelwyn ready to go is getting her equipment. All of a ranger’s starting equipment comes from the kingdom’s armoury. There is no cost to it. A ranger may carry five items. Aelwyn is going to start with light armour, a shield, a hand weapon, a bow and a quiver. The combination of light armour and a shield will increase her Armour stat up to 12. But wait, I hear someone say – the miniature doesn’t have a shield or a bow and arrow. True enough, but who cares. I assume she slings them on her back when not in combat. Rangers of Shadow Deep doesn’t care too much about completely accurate depictions. I’m playing this solo, so it’s not like I’m trying to trick anyone. Even if you are playing co-op, everyone else is on your side, so if the info on your Ranger Sheet doesn’t perfectly match your miniature,  don’t worry about it. It’s all for fun after all.

So that’s Aelwyn complete. As soon as she is given her first mission by her superiors, she’ll need to round up some companions. We will look at those next time.