The Dulwich Horror & Other Stories by David Hambling 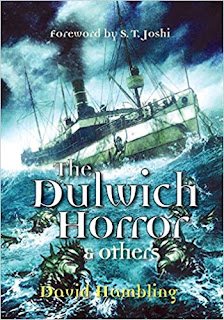 I must admit, when I first came across The Dulwich Horror, I was wary. The title, being such an obvious play on H.P. Lovecraft’s famous ‘The Dunwich Horror’, put me in mind of the worst Lovecraft pastiches, and I’ve read enough of those in my life.

That said, the reviews were good, it had a forward by S.T. Joshi, who is no slouch when it comes to identifying good weird fiction, and the publisher PS Publishing tends to put out good stuff, so I decided to give it a go. I’m really glad I did.

As it turns out, ‘The Dulwich Horror’, which leads off the anthology is one of the best pieces of weird fiction I’ve read in a long time. It is Lovecraftian, but Hambling puts enough of his own spin on it to keep it from being pastiche. Partly this is achieved by the setting, 1927 London, and the characters, a bunch of newly-graduated Oxford intellectuals, and partly through his particular way of describing Cthulhu and other Great/Old/Ancient/Alien entities. He really managed to convince me that these creatures could be living just outside our reality, almost hiding in the cracks of our mathematics and science. Hambling is a skilful writer.

While it is true that none of the rest of the stories can quite live up to that first one, there is not a bad story in the lot. All of the stories are vaguely connected, but the book is at its best in the three stories that are connected by the central character of The Dulwich Horror. It is unusual to see reoccurring characters in true Mythos fiction (or obvious reasons), but again, Hambling pulls it off, and even provides a believable and unusual ending. In fact, I think the book could have just included those three tales, and I would have been just as happy.

It’s a good anthology and would stand proudly on any weird fiction collector’s shelf.