In the Wargaming Mags! 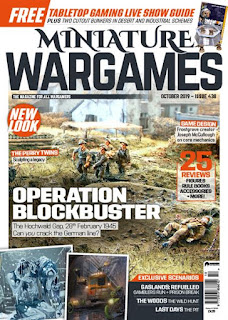 It was a bit of a quiet summer on the Ren. Troll. Partly this was due to a lack of hobby activity on my part, but also because I ended up writing a slew of magazine articles, which kind of fulfill the same writing urge as blogging. This wasn’t something I set out to do, it just sort of happened. Well the first fruits of those labours can be seen in the newly released issue of Miniature Wagames (#438).

I’ve actually got two pieces in the issue. The first is a couple of pages discussing my starting point in designing a wargame, namely a game’s ‘Core Mechanics’. If you are interested in game design, you might want to have a look. I also get ‘The Last Word’ in the issue, where I write a bit about the rise of 3D printing in wargaming. This piece also features a very large photo of my face (not sure how that’s a selling point, but there you go).

My stuff aside, it’s an interesting issue that also includes a couple of cut-out card bunkers, a long interview with the Perry twins, and even a set of rules for historical battles in the Renaissance (no trolls though).