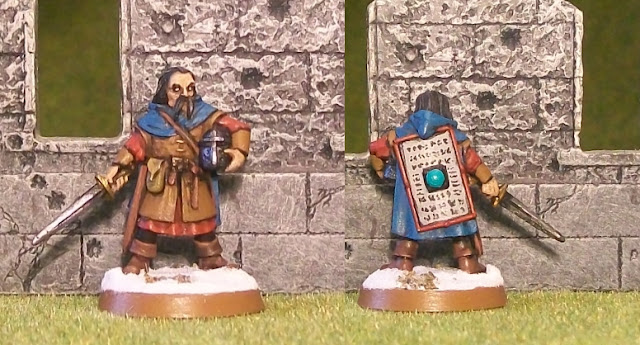 Having finished the wizard for my new Frostgrave warband, I got straight to work on his apprentice… And got very frustrated with the miniature in question before giving up and throwing it away. So, instead, I painted up my captain! Actually, I can’t afford a captain in my starting warband, so he’s going to start out as a Man-at-Arms, and hopefully get upgraded after the initial campaign day.

This figure comes from the Oathmark range, and while he’s a little short compared to the wizard, he’s got loads of character. I love the hair. I love the pose. I love the attitude. He just radiates tough. I can see he’s going to be my wizard’s right-hand man.

That said, considering he’s going to be such an important figure, in such a high-fantasy setting, I thought he needed a little more of the fantasy about him. At the same time, I was struggling with how to paint his shield. Then I hit on the idea of having the shield being covered in runes, almost like a scroll…

This actually gave me an idea for a magic item that will be appearing in Frostgave down the road, and highlights one of the reasons why I think it is so important for me to continue to paint miniatures, and play games – both are breeding grounds for creativity. [Insert justification for painting and playing games in 'work' time].

So, in some ways, this figure has more of a future than a present – someday he’s going to be a captain with a cool magic shield. For now, he’ll take charge of the soldiers in the warband while the wizard is busy working his magic and worry about his apprentice (should I ever paint one!).

Please forgive my rudimentary photoshop skills. It's useful, but not something I have a lot of interest in.