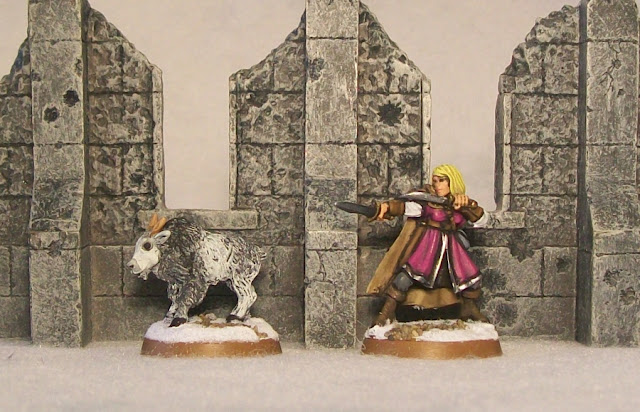 I’ve been continuing work on my new Frostgrave warband, and recently added two more figures. The first is my Tunnel Fighter. The miniature comes from the Rangers of Shadow Deep line, and I have painted it before, but it is such a great mini that I decided to use it again. I did, however, want to paint it completely differently to the first one.

I have decided that my warband is going to be a better-dressed than the untidy thugs and thieves that often accompany wizards into the ruins. With that in mind, I pulled magenta, one of my least-used paints, off the paint rack and got to work. I’m not sure I got the blonde hair quite right… it looks a little too vibrant, but otherwise, I’m happy with how it came out.

The rules for the tunnel fighter can be found in Into the Breeding Pits. It’s a rarely used soldier as its special ability (it’s better at finding secret passages) only comes up if players are specifically using the secret passage rules, which is uncommon outside of dungeons. That said, the soldier is no slouch in combat, and carries a pair of hand weapons, which is just cool.

The other figure is going to represent my warhound. I couldn’t find any dog models that caught my fancy, but I did have this Ghost Archipelago mountain goat laying around. I figure that not only will he do, but he actually matches the setting well. I must admit, I didn’t spend a lot of time working on him. That said, after originally painting him all white, I thought he really need some contrast, so dry-brushed on some black and grey.

Four members of the team are ready for action, six to go!