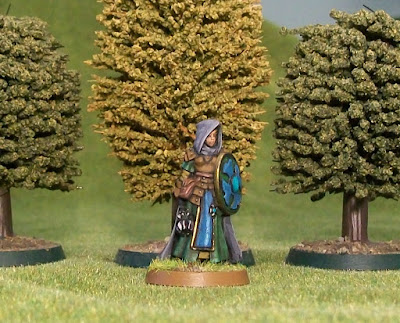 About two months ago, I identified this figure as my new ranger for Rangers of Shadow Deep. I’m not exactly sure what I find so appealing about this miniature, but it really speaks to me. It’s a Reaper figure, sculpted by Bobby Jackson, and, unsurprisingly, it fits in really well with the official Rangers of Shadow Deep miniatures. 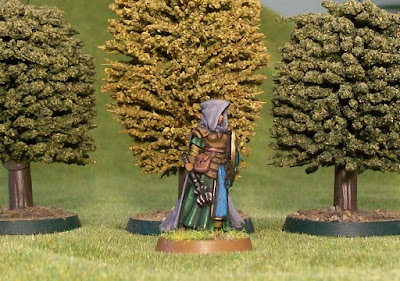 Despite having the figure for a while, I let a few other figures take painting precedence, as I knew I wanted to give this figure my A+ job, and I was waiting until I felt ready. Well, it took 3.5 painting sessions to get her finished, probably about 4 hours total, and I’m very pleased with how she turned out. I was initially worried if painting her armour as leather, instead of the metal that was probably intended, would work, but I think it has worked out great.

I'd also like to mention, I’ve been using an Element Games ‘Character Brush’ as my main painting brush these days, and I’m extremely pleased with it. Its point is as sharp as an 10/0, but can also paint more like a 0. Highly recommended. It’s really helped me to get great facial detail.

Anyway, the Grey Shadow is just the first of a new ranger warband that I’m working on. My plan is to actually have two rangers. That way I can either play solo with two rangers, or split the group in half if I’m every playing co-operatively. Well, that’s the plan anyway!
Posted by joe5mc at 06:38