The Ballad of Black Tom by Victor LaValle 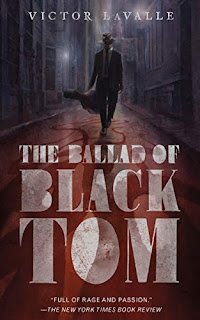 Slowly, I have been trying to catch up on the best ‘Lovecraftian’ fiction published in the last ten years or so. It began when I read Lovecraft Country, and continued recently with The Ballad of Black Tom.

Regardless, I’m glad that Victor LaValle read it, because he took the story, turned it around, and formed it into a really good weird-horror tale. LaValle basically tells the story from the point of view of a young black man who gets caught up in the weird machinations of people dabbling in dangerous magic. Like Lovecraft Country, it is a story that layers the horrors of racism on top of more traditional fiction/horror tropes. Although The Ballad of Black Tom was published four years ago, it feels very relevant for today.

Of special interest is the dedication from the author, 'For H.P. Lovecraft, with all my conflicted feelings'

Anyway, it’s a really good read, and if you are into horror or weird tales, you should give it a try.