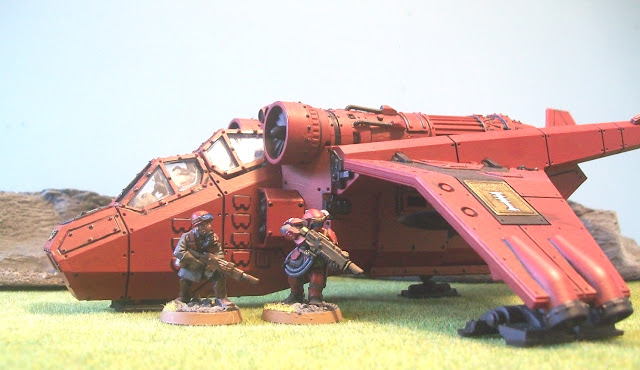 It’s been a hard few months, and finding a way to relax and enjoy my hobby has been more important than ever. So, I was looking for a big project that took me far away from my work. I wanted something that was going to take a good bit of work, but didn’t require too much thought. So, I decided it was finally time to paint up that dropship I’ve always wanted! I took a good look around to see what was available, and decided that nothing appealed to me more than the Imperial Guard Valkyrie from Games Workshop. 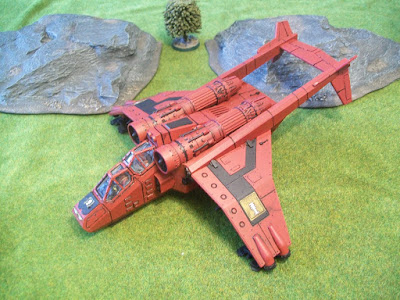 I also thought this would be a good chance to support some business that has likely suffered during the pandemic. I checked all of my usual ordering places, but everyone was sold out. Then, just when I was about to give up, Games Workshop announced the reopening of their online store. I had hoped to support them and a retailer at the same time, but such was not to be the case. Anyway, I don't mind supporting GW.

My original plan had been to paint it green in kind of a neutral ‘military’ look, but once I got it out of the box, I felt the strong desire to paint it up for my Demon Hunters army, the only 40K army I’ve ever completed. I haven’t actually added a new unit to this army in over a decade, and elements of it last appeared on the blog quite a while ago (Fighting against the Daleks here, here, and here). This actually forced me to order some paint as the red I used for the entire army isn’t a part of regular rotation these days, but I’ll probably work it back in now. 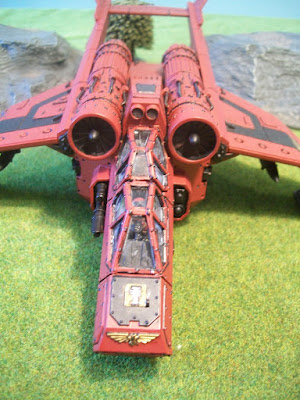 Assembling the vehicle proved pretty easy - although messy, so many plastic shavings in my office! That is, until, I got to the cockpit canopy. I just couldn’t get that to fit right no matter what I did. In the end, I just used a bunch of glue and pushed real hard. The upper canopy is a bit wonky, but it’s not too noticeable. Also, I think I put the wing landing gear on the wrong wings. It’s minor, but means it wobbles for a second when I put it down.

Actually, before I assembled the canopy, I painted the flight crew. I’m not sure it was worth it, but it is kind of fun to look through the glue-fogged windows and see them in there! I decided not to install the door gunners, as I figured I often wouldn’t want them there. Also, I got tired of the side doors and back ramp flopping open so I glued all but one side door shut. It’s not like I wanted to paint the inside anyway.

I also found some old brass-etched Inquisitorial symbols from back when I painted the rest of the army, so I glued them on as well.

Then I got down to painting. I don’t paint many vehicles or big things, and have never really been interested in getting an airbrush, so it was all buy hand, mostly using a size 1 brush. I slowly worked my way over from one wing to the other. It took four coats of thinned red to get the colour finish I wanted.  Amazingly, I only used four different colour paints on the whole thing: red, black, gold, and white. That’s it. Shows how much you can do with a very limited pallet. I used a bit of black smudging in places as my one nod towards weathering, but figure the Inquisition keeps their vehicles well painted.

In all, it took about two weeks to paint it and I’m very pleased with the outcome. At some point soon I’ll have to break all of the Demon Hunters out for a new ‘Army Shot’! 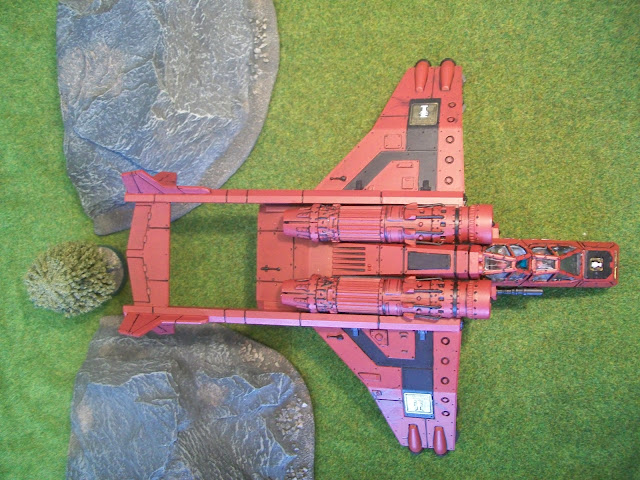