Miniature Friday: Glóin and the Worm 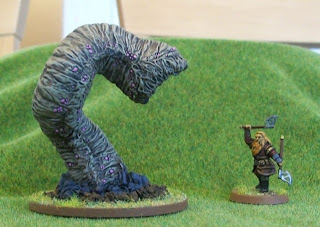 It’s a Miniature Friday two-fer here on the troll. Both of these figures come from the seventy I listed a week or so ago, and both have points for discussion.

Glóin, as probably all my readers know, was one of the companions of Thorin Oakenshield who went to reclaim their treasure from the dragon, Smaug. He was also the father of Gimli, a member of the Fellowship of the Ring. This figure comes from Game Workshop’s Escape from Goblin Town box set that they released with the first Hobbit movie.
I bought that box set back in January and have slowly been working my way through it. After Glóin, I’ve still got four dwarves left to paint. 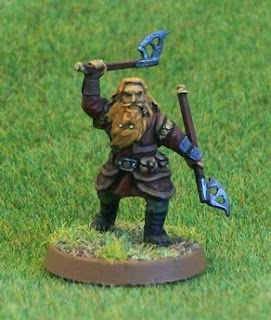 I’ve said it before, but it bears repeating. These Dwarves are probably the best, most detailed, plastic wargaming miniatures ever produced. Games Workshop may (deservedly) take a lot of flack for some of their business decisions, but credit where credit is due. I have rarely enjoyed painting a figure as much as I enjoyed painting Glóin. The quality of the sculpting encouraged me to be patient and give the figure the best paint job I could manage.

My second figure this week is a ‘Purple Worm’ from Reaper. I believe the Purple Worm is a Dungeons & Dragons monster, but there is no reason it can be used as any old giant man-(or dwarf)eating worm. This is also the first ever figure I have purchased from Reaper’s 'Bones' line of figures. After their huge kickstarter success earlier this year, most people in the miniatures world have heard of Bones, but for those who haven’t, Bones are old Reaper miniatures that have been re-released in some kind of soft plastic. This has allowed Reaper to cut the prices of these figures in half when compared to their metal equivalents. 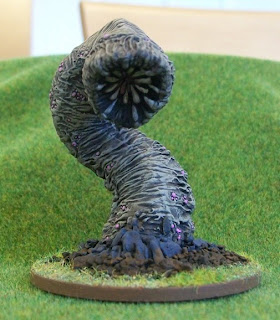 Now, I’m not sure the worm was the best test of the Bones line. It’s is such a large, chunky figure, that there is little chance of it bending, which is one of the major concerns with soft plastic miniatures. However, it did convince me that there is no noticeable loss of detailing between the metal and the plastic. If you look at my painted model, you will see lots of little purple spots (as purple as I could bring myself to paint the worm). All of these spots are detailed on the miniature.

Reaper claims that Bones figures do not have to be undercoated and you can apply your paint straight to the miniatures. I couldn’t bring myself to try this. I’m not sure I completely buy it. The plastic just looks too slick. Not that it really matters, I generally want to paint over a black undercoat anyway, so this is really a non-factor for me. 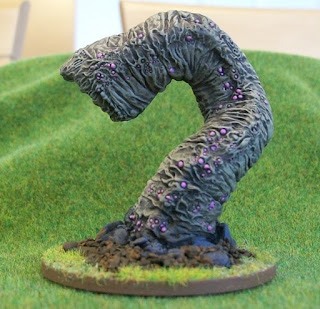 I like versatility in my figures, especially my ‘evil’ figures, and this big, mean worm should work for just about any fantasy or sci-fi setting.  A good addition to the collection.