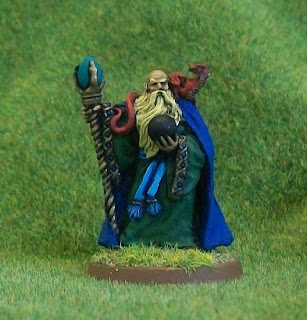 With the work I have been doing on my new wargame, Frostgrave, I have been spending a lot of time thinking about wizards. And the more time I spend thinking about a topic, the more likely I am to paint something associated. This is a classic Reaper figure and, it is a big chunk of lead. That’s actually a 30mm base the figure is on, and it takes up the whole thing.

When I first sat down to work on the figure, I decided I wanted to paint it in simple, bold colours. I knew I wanted to paint the little dragon red, so I needed colours that would contrast nicely with it. I've got  very nice blues and greens in my paint box, so that's what I went with. I especially enjoyed painting the cuffs of his sleeves, which appear to have little jewels sewn into them.
I made him blonde, mainly to increase the brightness of the model, but also because I've painted enough Wizards with long grey beards for the moment. This guy has obviously discovered an anti-greying spell (although apparently not a hair replacement one).

So, can this guy be used for Frostgrave? Certainly. There is no definite way of telling what type of wizard he is, though the crystal ball points towards him being a Soothsayer. He has obviously got himself some kind of staff of power, probably found in the ruins. His familiar is definitely uncommon and would raise a few eyebrows among his peers, but its not impossible.

A fun figure to paint, although he is probably slightly oversized to really be a 28mm miniature (even at Reapers 'heroic' scale). 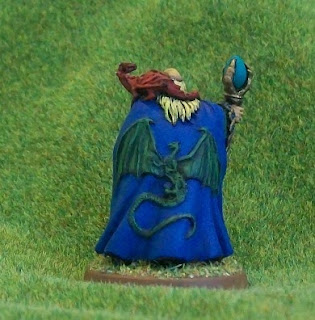