I wanted to share a shot of the complete Ghost Archipelago demo that I am running at GenCon. Not a bad set-up for the small table available. The really cool wooden platform terrain is from Death Ray Designs (although I can't find it on their website at the moment). The set includes some much bigger pieces that I didn't have room for, and you can set each platform at one of three different heights. The mat underneath is from Cigar Box Battles. It's actually a mat they made specifically for some Frostgrave scenarios set underground, but it actually works well as a watery base. 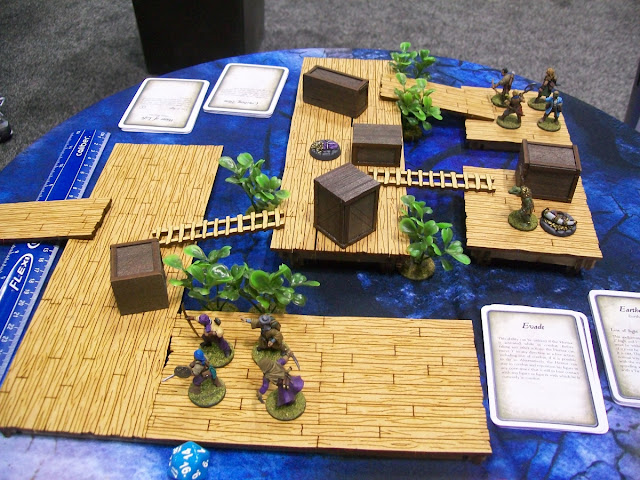 The first day went poorly for Vasha. I can't say I'm hugely surprised; he's the more subtle, and thus harder to play, Heritor, especially in a demo. That said, people seem a bit shy about having him throw knives, which is something he's really good at! He make my favourite move of the day when he leapt up onto a box and kicked the Wind Warden into the water!

Big Red has been having a better time. She showed just how deadly she can be, once inflicting a massive 16 points of damage on a Fight Roll of 17! That poor little archer was not recovered... 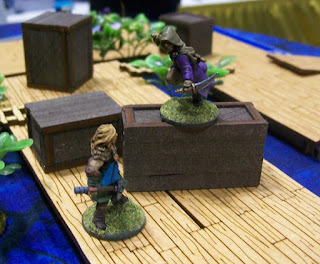 All-and-all, it has gone well today. Thanks to everyone who has come by to take a look at Ghost Archipelago or just talk about Frostgrave. It's always good to hear that people are enjoying the game.

I've only seem a bit of the rest of the convention. After waking up at 2:30 this morning (thanks, jet-lag) and then spending ten hours in the dealer hall, I am completely shot. Which is too bad, if I wanted to, I could go see They Might Be Giants, who are playing at GenCon, and still have plenty of time to make it back for the Pathfinder games that are starting at 2am!
Posted by joe5mc at 16:14