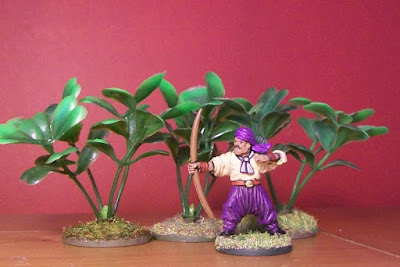 Here is the last member of Collandra's little band. In the demo, I'll only be using four figures a side for the sake of brevity. Full Ghost Archipelago crews will be 10 figures, and since standard crewmen are free, there really isn't much reason for a player to ever have less than that, unless dictated by a scenario.

Oren, here, was made from a test sprue of the Ghost Archipelago plastic crewmen. If you like swashbuckling adventurer types, you are going to love this sprue...

Sorry about the poor photo quality. I just finished painting this guy, and most of my equipment, scenery, and what not are packed up for the move. He seems to have come out a much darker purple than he actually is!

In Ghost Archipelago, shooting works pretty much the same as it does in Frostgrave. In fact, there are only two, minor, difference and neither relates to the actual mechanics of shooting. The first is that 'quivers' are now items. So, an archer must have a bow and a quiver to shoot. This makes no difference at all to the crew, but for characters like Heritors, it means they have to devote 2 item slots to having a bow or crossbow. This is a balancing mechanism, to make shooting more 'expensive'. It didn't matter much in Frostgrave, where magic was the main thrust, but it matters a lot in a game focusing on warriors. The second, related, difference is that I have included 'throwing knives' as a weapon. This is essentially a one-shot ranged attack, that can also be used as desperation back-up weapon. I honestly don't know how important an addition to the game that is, but it is fun and cool so I wanted it in there!