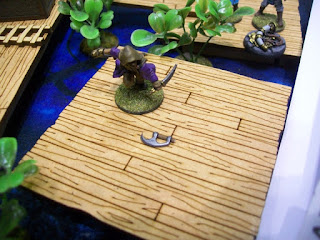 The first two days of GenCon have been wonderful and intense. I am, unfortunately, suffering from the double blows of jet-lag and a cold, and my voice is dropping in and out, but it's been wonderful none-the-less. Thanks to everyone who has come by the stand to talk to me about Frostgrave or have a look at Ghost Archipelago. It's a great opportunity for me to be able to talk face-to-face with fans of the game and to hear what they like and don't like about it. In fact, many of the little tweaks to the system that are found in Ghost Archipelago come from the feedback I've gotten at conventions and online.


In bad news, the Ghost Archipelago has claimed its first victim. At some point during the day, the sample copy of the rulebook fell over and crushed Portock, snapping off his axe head. This is the major downside to using resin sample casts as opposed to the metals that are coming! Bar very delicate drilling, I don't actually know how to fix this, and I probably won't bother. 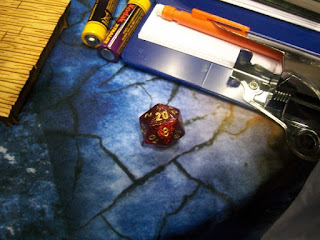 In other news, I have a Frostgrave show-down tonight with one of the bloggers from Geek Dad and a couple of his friends. I thought the occasion called for a new d20. I saw this red-sparkly one on the Chessex stand and couldn't resist. It just looks like the kind of die you should make spell rolls with. Now, I know what you are probably thinking: 'hey, he's the writer of the game, he doesn't need the advantage of a new die, one that still has its full compliment of luck'. Maybe, but my track record for convention games is rather poor - plus, I just realized that I left my warhound at home, so I'll be going in a man (dog) down!

I'll let you know how the game goes. There are rumours of pizza being involved, so even if it goes poorly, I suspect the night will be a win!
Posted by joe5mc at 05:11