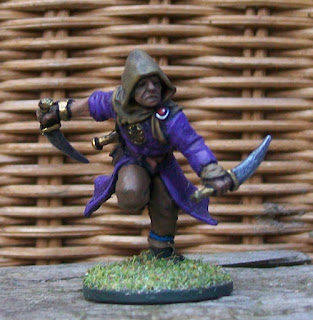 I suspect that this will be one of the most popular figures in the Ghost Archipelago line.


Meet Vasha Tune, the second Heritor who will be battling it out in my GenCon demo. Unlike his opposition who was an unsubtle combat monster, Vasha specializes in fighting on his own terms. For his stat advance, I gave him +1 Move. As Frostgrave players will know, that extra move can make a big difference. For his Heritor Abilities, I gave him Burning Eyes, which will help keep away the minor threats, and Evade to get him out of any fights he'd rather not be in. He also has Shadowfold, so he's difficult to shoot at. Finally, he has Leap, so he can get around even quicker, and Deadeye, which makes him scary when throwing knives.

He would likely lose a straight up fight against Big Red, but she has to catch him first - and dodge a bunch of incoming knives! 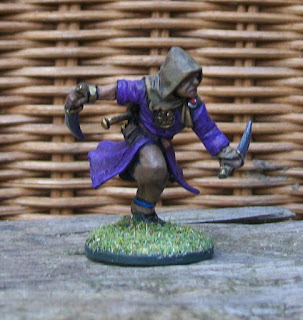 In the rulebook, there are thirty different Heritor Abilities to choose from. I have also made a table for those really 'old school' players who want to roll for random Abilities. This lead me to a problem - do you know how difficult it is to create a table with 30 equally probable outcomes using nothing but a 20-sided die. Go on, try it! In the end, I cheated slightly, and some Abilities have a slightly higher probability than others, but there you go.

The irony is that while I was working on this, my friend gave me a pack of 'unusual dice' that actually includes a 30-sider. I was sorely tempted to put the table in there using the d30, just so we would all have an excuse to have one!