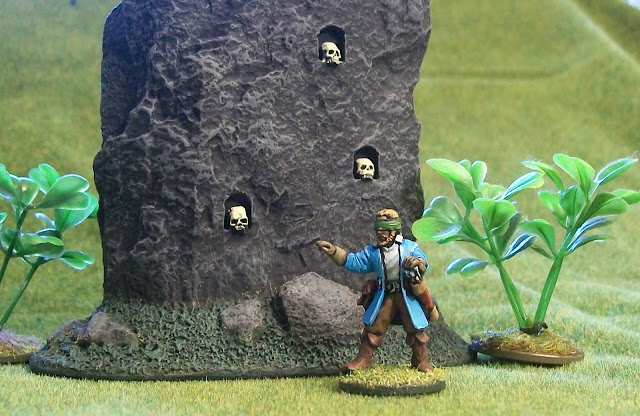 The next to join Collandra’s band of adventures is Verith, the Wind Warden. How cool a figure is he? A blind archer with no bow!

It was important to me, when I started work on Ghost Archipelago, that Wardens have a different feel and purpose than the wizards of Frostgrave. I decided early on that I would make the Wardens animists, that all of them would have some tie to nature. This fit well with the setting, as the Ghost Archipelago is such natural, alive place (as opposed to the dead, artificial city of Frostgrave). So, I invented five different branches of Warden magic, and gave each branch 6 different spells to choose from. A starting Warden chooses three spells from their own branch, and one from a different branch. Wardens have significantly less spells that the wizards, partly because they are meant to be less powerful, but also because, with players already having to keep track of their Heritor Abilities, I didn’t want the game to get too confusing! However, the good news for Wardens is that they never take damage from failing to cast spells, also, on average, their spells have lower casting numbers.

In this way, I hope, Wardens become more of the supporting pieces they are meant to be. Powerful individuals, but not as dangerous or as dominate as the Heritors. Also, I think players will be happy to hear, Wardens gain experience and levels independently, thus giving players essentially two ‘characters’ that can grow over the course of a campaign.

So, what about Verith? He’s a Wind Warden, so I gave him three spells from his branch: Windblast, to push people around; True Flight, to support any archers, and Dust Devil for a little damage potential. I also gave him the Wave Warden spell: Water of Life for some potential healing when things go wrong!