That time Little John killed me 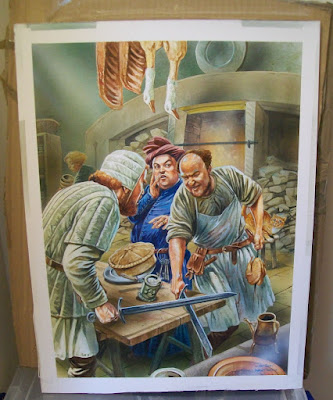 A couple of weeks ago, I went back to Oxford for Osprey Publishing's 50th anniversary party. The company has been such a major part of my life over the last decade-plus, that I didn't want to miss it.

I arrived in Oxford in the morning. This gave me the chance to meet up with Phil Smith (Head of Osprey Games), Nick Eyre (owner of North Star Military Figures) and Dan Falconbridge (owner/editor of Wargames Illustrated). We had a drink in the Eagle & Child, lunch at another pub, and the went over to the Bodleian Library for their temporary Tolkien exhibit. It’s was a great little exhibit, especially for the cost (free). The highlights were seeing a few pages of Tolkien’s scrawled Middle-earth writings, lots of his original artworks, and, of course, his recently discovered annotated map of Middle-earth. The exhibit has now closed, but considering its popularity, I suspect it will be back.

At the party that evening, I got to catch-up with lots of old friends, Osprey colleagues both past and present. I also chatted with some of the authors and illustrators that have helped make Osprey great. Most notably, I got to speak to two artists that I’ve had the chance to work with closely in the past. I had a long chat with Mark Stacey who illustrated the Steampunk Soldiers and Steampunk Soldiers: The American Frontier books that I wrote with Phil Smith. I also got the chance to speak with my old buddy, Peter Dennis. I’ve worked with Peter Dennis on a lot of projects, including my books Dragonslayers and The Story of Santa Claus.

At the party, Peter asked me if people ever recognized me from the Perry Miniatures' ‘American Civil War Infantry Box’. I said ‘no’, but that I did get the occasional comment about appearing in Robin Hood…

Several years ago, when I was the commissioning editor for Osprey’s Myths and Legend series, I commissioned Peter to illustrate the book we were doing on Robin Hood. In one of the stories, Little John infiltrates Nottingham castle and ends up in a fight with the cook and a porter. When Peter came to illustrate the piece, I discovered that I had been cast in the role of the cook and that Phil Smith had become the porter. Little John seems to be played by Peter himself!

It’s not the most flattering depiction of either Phil or myself, but it is all the more wonderful for that.

A few days after the party, I received a package from Peter containing the original artwork! (It's not the first time I've seen Peter's generous nature.) There is not a lot of open wall space in my little office to hang paintings, but something else is going to have to give way! (Especially since my wife has already made it clear that it will not be going up in the lounge – for reasons not clearly expressed).

Thanks Peter. It’s a great memory of a fun time. I hope that we have the chance to work together again some day!