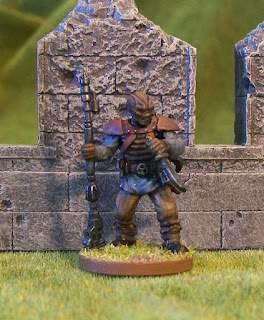 If the title of this blog has any meaning to you, then you are at least a level 2 Star Wars geek. For example, my sisters are both level 1. They have seen all of the movies, know all of the main characters, and are ready and willing to jump into a debate about the Force or if Han fired first. However, their knowledge, and their interest, ends with the movies.

Unlike them, my interest in the Star Wars universe has, at times, branched out into the books, comic books, games, cartoons, etc. Through this, I have gained a lot more knowledge of the universe, including a lot of ‘race names’. I’m still far from an expert, but I can tell my Weequays from my Trandoshans.

For those that don’t know – Weequays appear in Return of the Jedi, most notably in the Sarlacc’s Pit sequence. They are the prune-faced guys with dreadlocks and heavy looking halberds that are apparently tasked with pushing prisoners off of the plank. As we all know, it doesn’t end well for these Weequays.

I got four plastic Weequays in the Jabba’sRealm expansion for Star Wars: Imperial Assault and just finished painting up my first one. Once again, the figure is excellently sculpted and cast. Even in somewhat bendy plastic, it was a joy to paint. I went with a muted paint scheme as befits a desert-waste pirate, methinks.

I’ve got three more of these guys, and while I like the pose, I’m thinking I might try converting some of the others. I’d like at least one to be holding a pistol (as one does very briefly before Luke chucks him in the pit). Not sure if I’ve got the bits I need, but I’ll see what I can do.

Having finished this guy – I’m struck by the resemblance between him and the Klingons as showed in Star Trek: Discovery.