Tiny Cars to Stomp (and a Fun Day with My Son) 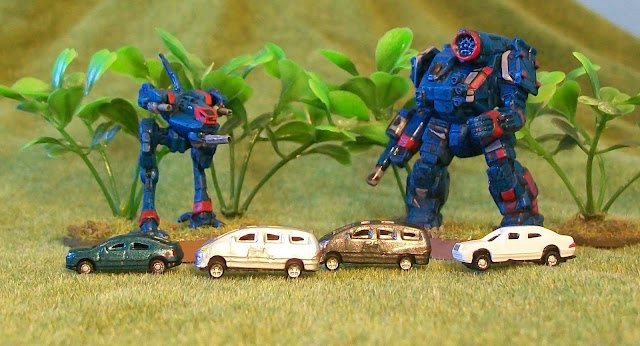 This past weekend, I took my two-year-old son to the Folkestone Model Railway Exhibition. He can’t fully articulate his interests, but he doesn’t need a full vocabulary to make his love of ‘choo-choos’ apparent. As for myself, I’ve always loved model trains, even if I have never owned one, and only needed this slight pretext for attending the show. Besides, I figured there would probably be a few items there that would be suitable for wargaming…

The show was actually a bigger, more impressive affair than I expected. There were something on the order of 40 different track layouts on display, and probably 20 dealers. This is the show’s 47th annual installment, so it’s well-established, and even on Sunday it seemed well-attended.

My son loved it. In fact, he liked watching the trains so much, it was often hard to get him away from one display so we could look at another. There were some impressive set-ups. My favourite was a mining scene that had several trains running, including one underground, as-well-as a kind of cable-car set-up. Strangely, my son’s favourite was the guy who was at a table fixing broken trains and running them back and forth on a very short track to see if they worked. He did have a pretty cool engine that was billowing smoke.

The only drawback to the whole experience was that I had to constantly lift up the heavy little kid so he could see the trains. The show did have stools you could use, but even with these he was still a little too small. So, by the end of the show, my arms were burning.

It’s hard to do any shopping while carrying a 2-year-old who wants to look at trains, but I did manage one little purchase. I bought some tiny cars that I thought would work with my 6mm set-up. I think they are ‘Z-scale’. In truth, they are actually too big for traditional 6mm – although a lot of 6mm is bigger than it is supposed to be these days. Also, when compared to my mechs, which are up on bases, they look even smaller. Anyway, they work for me.

A good day, all-and-all. I suspect we’ll go again next year, if he’s still into trains, when he’ll hopefully be tall enough to use the stool.
Posted by joe5mc at 04:21