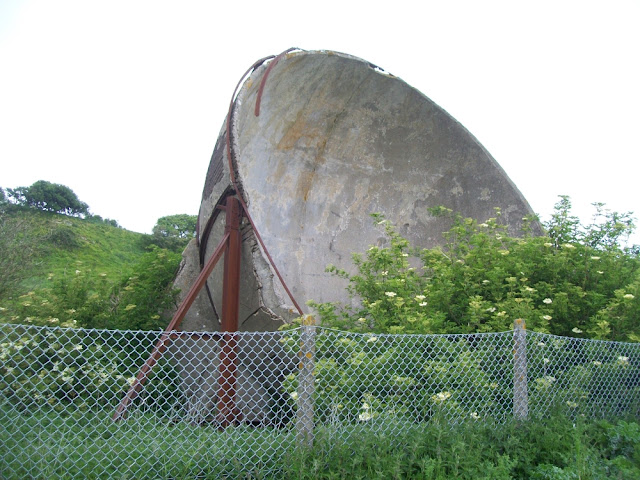 I mentioned a few weeks back, that I had set seven ‘goals’ for my life. One of those goals is to visit 100 interesting spots in Britain. When I was young, the only place I really wanted to travel to was Britain. Now that I am here, I really ought to take advantage of it. It is just so easy to become complacent about the place you live, so I wanted to kick myself into gear. I gave the goal a number, ‘100’, just because I find goal-setting works better if you have a concrete way of achieving it – a point where you can say it has been done. Otherwise, a vague goal tends to be forgotten.

So, for my first ‘Interesting Spot’, I set-off to find the Hythe Sound Mirror. Created in the days between World War I and World War II, sound mirrors can be found up and down the Channel coast. In the days before radar, they were a way of detecting in-coming aircraft by reflecting the sounds of their engines. It all seems rather unlikely, and although it was never put to the military test, they do apparently work.  Of course, radar made them redundant, and most were left to crumble away.

The sound mirror near the town of Hythe, sits high up on a steep ridgeline in an area known as ‘The Roughs’. Technically, the area is owned by the Ministry of Defense, and is part of the nearby training ground, but it is open to walkers (and grazing sheep). I quickly learned, however, that the area lives up to its name. The ridge is apparently prone to landslides, which has left very lumpy and uneven terrain. Although I found a ‘path’, it was badly over-grown, and often surrounded by stinging-nettles and other spiky plants.

As I made my way onward, taking in the amazing views that stretched out over the town, the training ground, and out over the Channel, I passed by a large circular depression, scattered with broken concrete. I suspect this was the sight of the other sound mirror that used to be located here, which  was destroyed in a landslide a few decades back. After 25 – 30 minutes of walking through the Roughs, the giant upright bowl of the sound mirror came into view. 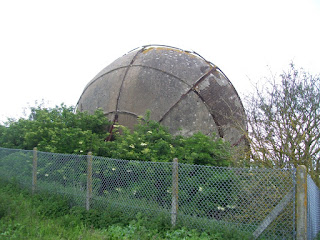 I was shocked by both its size, maybe 30 - 40 feet high, and its rusty and cracked condition. There is a fence around the whole thing, which I gather is more for the protection of people than the mirror. It honestly looks like it could collapse at any moment. About twenty yards below the mirror, and of to one side, there is a concrete bunker. Unfortunately, my camera died before I got a photo of it – not that it’s hugely photogenic.

Inside, the bunker was filled with all of the trash you would expect in such a remote location – rusting cans, cigarette ends, suspicious little plastic bags. It’s hard to imagine someone stumbling home from this place in the dark while drunk or stoned...

Although interesting, and with beautiful views, it’s not the kind of place that makes one want to linger. It is completely exposed, the ground is all uneven and overgrown, and it all has an empty and lonely feeling, even if you can see civilization in most directions.