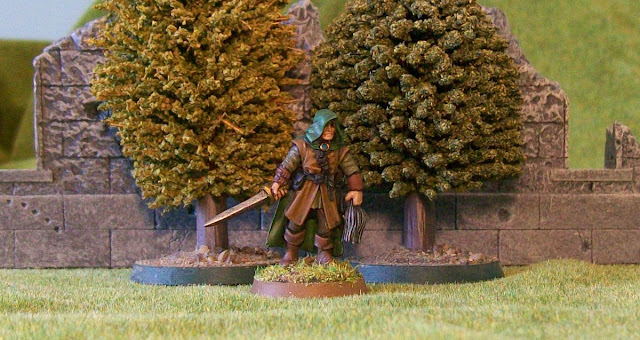 After my brief (unsuccessful) foray into competitive miniatures painting, I am back to painting purely for fun! I’m a still working my way through the immense (5 figure) miniature range for Rangers of Shadow Deep. Here we have ‘The Cover Ranger’, that is to say, the figure that was based on the ranger on the cover of the book. Of course, that ranger has his back to the viewer, so Bobby Jackson had to use a bit of imagination when sculpting him!

I really love this figure. It’s just so classic ranger, all belts, tunic, cloak and sword, and so I went with the classic ranger colour scheme of browns and greens. That said, I did something I rarely do, which is paint the belts black. Black is a tricky colour to work with, but I think it came out great here.

I know some people will be put off by the severed head he’s holding, which is fair enough. This would probably be relatively easy to remove. I painted it up as a ghoul head. That way, it is a nice, clean severed head. Undead means no blood, you see.

I can’t help but feel that if this had been the miniature in my painting contest, I would have gotten more votes! The photo makes the figure look a bit shiny, but I think that’s just the flash from the camera.

Anyway, just one ranger to go and then some giant flies!
Posted by joe5mc at 03:21