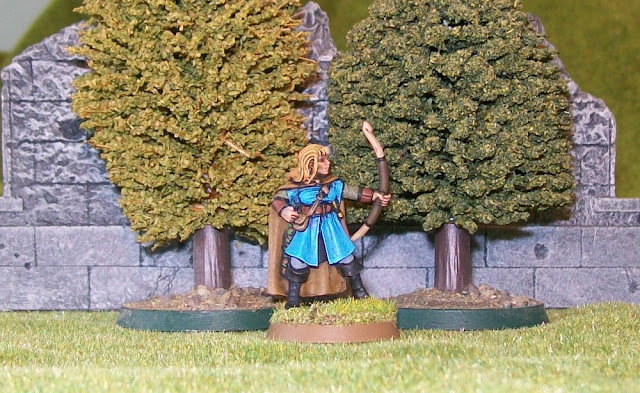 I have painted all four of the official Rangers of Shadow Deep ranger figures! Now just the giant flies to go.

After painting the first three rangers in classic green and brown, I wanted to go with something a bit different for this one. So, I painted her up in blue – the traditional colour of Lorenthia, the kingdom that has just fallen prey to the Shadow Deep at the beginning of the game. There are still lots of Lorenthians around, and many of them are fighting with Alladore to avenge their fallen country. In fact, in a future mission, I’m planning for it to matter whether a figure is from Alladore or Lorenthia – so decide now!

I went with strawberry blond hair to further separate her from the Alladoreans who are mostly dark haired.

Another great little sculpt from Bobby Jackson. I’ve always been a fan of Bobby, but I think his digitally sculpted figures might actually be better than his traditionally sculpted ones.
Posted by joe5mc at 03:18