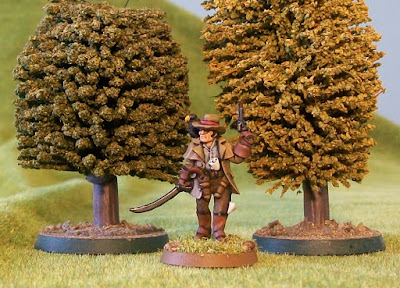 Throughout the year, I am slowly revisiting some of the games that helped create and replenish my love of gaming and that have spurred me on to my own creative journey. Lately, I have been re-reading Deadlands.

I was in university at UNC, working at a dingy, but wonderful gaming store called Cerebral Hobbies, when Deadlands hit the market. To me, it came crashing in like a tidal wave. Not since my earliest days of gaming had I been so completely blown away by a new book, a new setting, a new ruleset. For me, it was revolutionary. 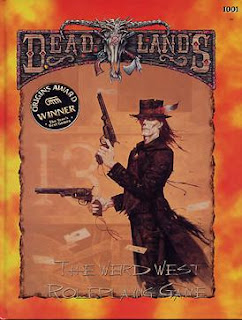 The original Deadlands had an amazing run. It even sparked a miniature wargame spin-off called The Great Rail Wars. Years later, the whole Deadlands system would be re-imagined, using a lot of the mechanics from Great Rail Wars, into a new generic system called Savage Worlds. This wonderfully simple, fast-paced, role-playing game remains one of my favourites.

I’ve had so much fun revisiting Deadlands that I wanted to paint a few figures to go with it. Thus, the above. This figure is actually from the Dracula’s America range, but fits right into Deadlands as well.

I might just have to bust out a character sheet and stat this guy up!