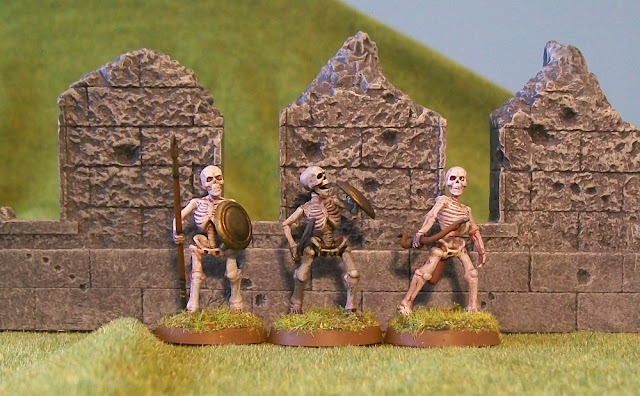 If you play any of my games, you will probably have need of a few skeletons. Maybe more than a few. Skeletons have always been one of my favourite fantasy monsters, and because they are so fragile, they are great for scenario writing. You can throw them at the players, but you know they aren’t likely to hang around too long.

When I first heard that a new company, Wargames Atlantic, was releasing a new set of plastic skeletons, I knew a box would be in my future. Well, I recently received that box, and have started putting some together. These are the first three that have made it all the way through painting!

Assembly-wise, I was pleased with the figures. Skeletons are always going to be a bit tricky, as their thin pieces make them more difficult than most figures. This is especially true when removing them from the sprue and cutting off any excess bits. It wasn’t hard to do, but I wouldn’t want to hand the sprue to a hobby newcomer either. Each sprue has enough parts for 4 skeletons, but one of those requires gluing both of the legs onto a torso. I’ve got to admit, I really just can’t be bothered to do that – just way too fiddly for me. So for me, each sprue comes with 3 skeletons and a small pile of spare bones.

I realized, after the fact, that I glued the archer skeleton’s bow arm onto the wrong side. Completely my own fault, and it should have been obvious when I couldn’t find many matching arms for the other side. Anyway, it seems to have come out okay.

Considering their status as horde enemies who tend to not stay on the table too long, I don’t think skeletons are worthy of careful paint jobs. These three are literally: prime, ivory base, wash, ivory again, and then white. Then a quick paint of the weapons and the base. That’s it. I tried both a black wash and a red/brown wash, and I have to say, I much prefer the red/brown. They just look a bit more menacing that way.

So, all-and-all, it’s a nice box set, and a great deal for anyone who wants a pile of skeletons.
Posted by joe5mc at 04:55