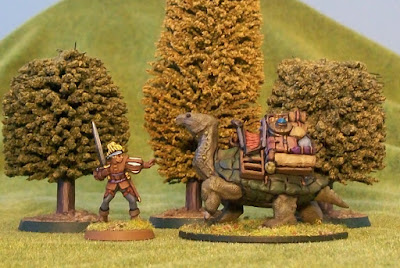 I recently painted up this Reaper bones figure and just needed an excuse to use it in a game. So I wrote rules for it in Ghost Archipelago. I'll probably put them in a future issue of Spellcaster magazine, but for now, here they are for free!

Most of the islands of the Ghost Archipelago are so small, and so filled with difficult terrain, that mounts are generally useless, and boats work better for transportation. On a few of the larger, more open islands, however, tribal groups have domesticated riding beasts. One popular choice, especially on more arid islands is the giant tortoise. These slow, gentle creatures, may not be an obvious choice for either a mount or a pack animal, but on closer examination they do have several desirable features.
Giant tortoises are incredibly long-lived, and most manage at least a couple of centuries. Thus, the work that is spent in the raising and training is paid off over many, many generations of users. Although slow, giant tortoises are capable of carrying significant weight over long-distances. They can manage this work in the punishing heat of the Ghost Archipelago and still only need to drink every few days. Finally, while they are of no particular use in battle, they are incredibly tough, and can survive nasty wounds, even when their thick shell is penetrated 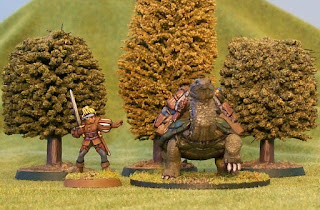 Giant Tortoises in a Crew

Giant tortoises do not count against the number of figures in a crew. That said, a crew may contain a maximum of five. Tortoises never activate on their own. Instead, they can activate with, and move with, any crewmember that is adjacent to them, with the limitation that they can only activate once per turn. If a figure is riding a tortoise, see below.
If a giant tortoise is killed, roll for its survival after the game as though it were a specialist crewman.

It takes one action to either mount, or dismount, a giant tortoise. While serving as a mount, giant tortoises follow most of the same rules as small boats, with the following exceptions:
·       They move on land, not water.
·       They may carry a maximum of three figures (see below)
·       Giant Tortoises may make two move actions (for a total of 4.5”) each turn.
·       Giant Tortoises can be directly attacked under the normal rules, but still never count as in combat.
·       A figure riding a giant tortoise can spend an action to attack any figure that is in base contact with the tortoise, and does not suffer -1 Fight.
·       Shooting modifiers, and rules for ‘boarding a small boat’ are handled as normal.

A giant tortoise is capable of carrying up to 15 items. Alternatively, they can be used as mounts with every human-sized figure replacing 5 items worth of carrying capacity.
Any member of the same crew that is on, or adjacent to a giant tortoise may take, or exchange, any one item carried by the tortoise. 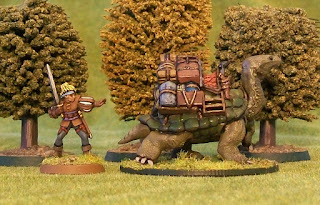 The gentle creatures known as giant tortoises can grow up to the height of a man. Although they are slow and unaggressive, they are also difficult to kill. Their armoured shell is nearly impenetrable to most hand weapons, and even when struck in their softer parts, it takes a grievous wound to put them down.
When shooting at, or fighting against, a giant tortoise, a player has a choice to make. They can either attack as normal, or they can state they are aiming to hit an unarmoured part of the creature. If this option is chosen, the player suffers -2 Shoot or -2 Fight as applicable. If they hit the giant tortoise, though, treat it as armour 12 instead of 16.
Giant tortoises may never jump, climb a vertical surface more than about 4-feet high, or pick up treasure. They may never use items, but may carry up to 15.


For anyone having trouble reading the notes section on the table, it reads: Armoured Shell, No jumping, high climbing, or picking up treasure tokens. Carrying capacity 15 items. May serve as mount.
Posted by joe5mc at 06:33