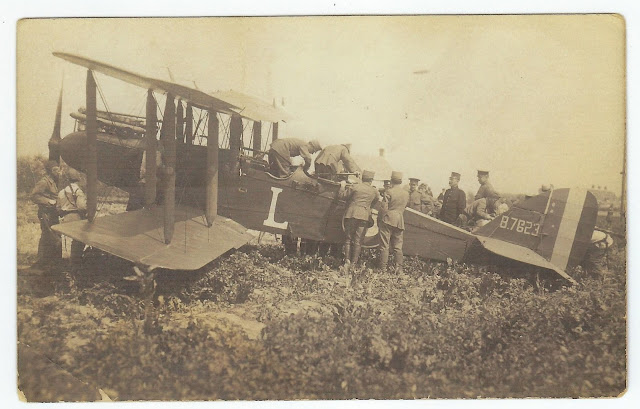 I was digging through some old family history files that my aunt had sent me, when I came across a few pieces about my great, great, uncle Donald Ryan Harris.  Along with with some great photographs, was this report he wrote of his last flight in World War I.
____________________________ 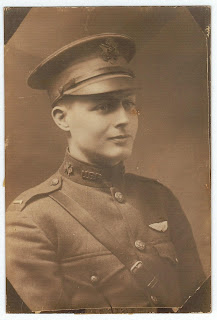 Report of 1st Lieut. Don Ryn Harris, of the American Signal Reserve Corps, Aviation Section, attached to the Royal (British) Air Force, who was obliged to land with his Aeroplane near Flushing The Netherlands on August 16th,  1918.

The formation of bombing machines from the 211th Squadron, Royal Air Force, left its aerodrome on the morning of the sixteenth of August, nineteen hundred and eighteen. I, though I am an American Officer of the Signal Reserve Corps, Aviation Section, am attached to the Royal Airforce and the 211th Squadron, and was part of the aforesaid formation, flying a DH9 bombing machine. The formation proceeded well inland towards Burges having as its objective Bruges Docks. There was a slight anti-aircraft fire at the formation from the lines all the way to Bruges but at that point a thick and well directed barrage was put up at us.

When just over Bruges my machine was hit in several places. (Several?) holes were torn in the wings and the lower leading spar of my right-wing shot through, also the cable that acts as the anti-drift wire. In addition a large fragment of shrapnel entered the radiator of my machine, which allowed all the water to escape. We carried on with the formation, dropping our bombs on the docks, two one hundred and twelve pound bombs, and also took the photographs we had been detailed to get. 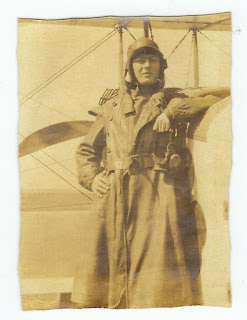 Our temperature had risen past the boiling point by this time and all the water had escaped from our radiator. The engine began to miss on three cylinders, so I had James Munro, 2nd Lieut. R.A.F. who was my observer, fire the distress signal. We followed below the formation to the coast over Zeebrugge, but there the propeller stopped, and as the distance was too great to glide to our lines, I turned the machine towards Holland. We crossed the coast of Holland over Flushing, at the height of two thousand feet, firing another signal light to indicate our distress. Munro had thrown overboard his gun and ammunition pans to lighten the weight of the machine. I landed the machine in a potato field near Koudekerke safely and neither of us were hurt. The left wheel of the machine was broken however in the landing.

Here we were taken in change by the Dutch Military authorities and given our parcels. Tomorrow we got to The Hague to be interned. 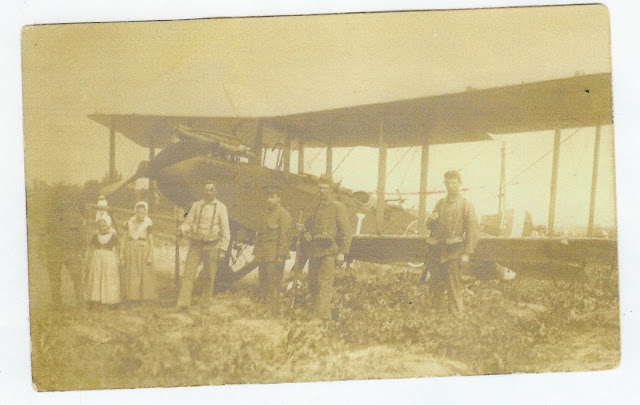 The back of this photo reveals that it was sent as a postcard from Donald to his parents while he was in Holland, where he spent the remainder of the war.
Posted by joe5mc at 03:44