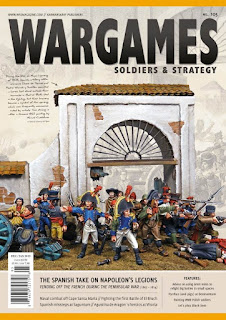 In this issue, I’ve got an article about 'Dice-Rolling Etiquette'. I admit, at first glance, it sounds like a pretty light topic, but actually, rolling dice is one of the most common elements of playing a wargame, and almost nothing is ever said about it. Over years of gaming, I have encountered many different dice-rolling approaches or styles that have significantly hindered my fun, or the fun of other players. Often, this isn’t intentional, but since the goal of the game is for everyone to have fun, I though it deserved a little consideration.

Otherwise it is a pretty varied issue, with a lot of stuff for the historical player, including articles on WWII, Ancient Rome, and a focus on Spain in the Napoleonic Wars.