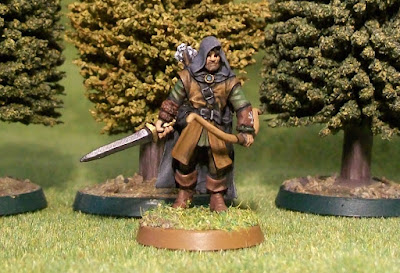 A few months ago, while painting one of the Rangers of Shadow Deep miniatures sculpted by Bobby Jackson, I noticed how close the miniature was to my metal image of Strider (a.k.a. Aragorn in his guise as a ranger). There were just a few issues with it. Mostly notably, I didn’t think it fit the character to be holding a severed head, but also, I thought the face wasn’t quite right, and probably he should be carrying a bow. I finished painting that figure, and promptly forgot about it.

A few weeks ago, I painted up my ideal Legolas miniature. That once again got me thinking about Aragorn, and I remembered that I had another copy of that Ranger miniature in my rapidly decreasing lead pile. I pulled it out and had a look.

I have never been a great figure converter. I generally find the process frustrating, as my execution rarely lives up to my idea. Still, since I already had a finished version of the figure painted, it seemed I had less to lose. So, I cut off his left hand (making a severed hand holding a severed head!). I then went to my plastic bits box to look for suitable substitutes. I tried a few different possibilities, and went back and forth for a while on whether to give him a bow or a dagger in that hand. In the end, I settled for a bow, as it seems more rangerly. The bow (and hand) comes from the Oathmark Elf Infantry box. I pinned it into place and used a bit of green stuff as well to hold it together. It’s not perfect by any stretch, but luckily, the extra green stuff, looks like a bunched bit of his sleeve that sticks out of the grieve. 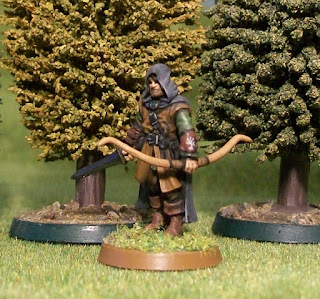 I also glued a quiver on his back. In truth, a careful examination shows that there are no straps for the quiver, but that doesn’t bother me much.

I’m not going to lie, I was seriously proud of this simple conversion, but it also made me nervous. I now had a completely unique figure, and I fretted over ‘blowing the paint job’. Thankfully, there is something about these B. Jackson sculpts that really work with my painting style. I took it very slow, and really tried my best on every single element of the piece.

I started with the face, because that was the last element of non-Strider that concerned me. I did two things to that effect. I heavily shaded the inside of the hood, allowing the dark to just creep onto the side of his face. This had the effect of narrowing the face slightly. I then gave him a stubbly beard, which helped soften his heavy jaw. These combine to make his face less distinct, but that’s perfect for a shadowy ranger.

From there, I just picked an area and worked it, until I was happy with it. I’m usually a base, wash, highlight man, but for many parts of this figure I used five or six combinations of washes and water-down paint. The effect of this is most noticeable in the folds of his tunic. 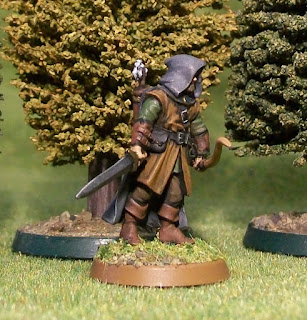 I decided to paint him so he fit with my ‘Post Lothlorien’ Legolas. So, he’s got the grey cloak. He’s also got a green cloak clasp…the Elessar perhaps?

As a final touch, and a nod to the movie depiction of the character, I painted a little White Tree of Gondor on his left grieve. I always thought that Aragorn donning the dead Boromir’s grieves in the film was a really nice touch. My free-hand wasn’t perfect here, but it’s good enough to make me happy.

All-and-all, I think it might be my best ever miniature paint job, and I now feel like I’ve got a Strider figure that fully fits my vision of the character.

As I was doing it, I got all excited and though I would do the other 7 members of the Fellowship, but I’m not sure if I have found the ideal figures for all of them yet. So, instead, I’m not going to worry about it. I’ll take them as and when they come… of course I could also do the Grey Company… 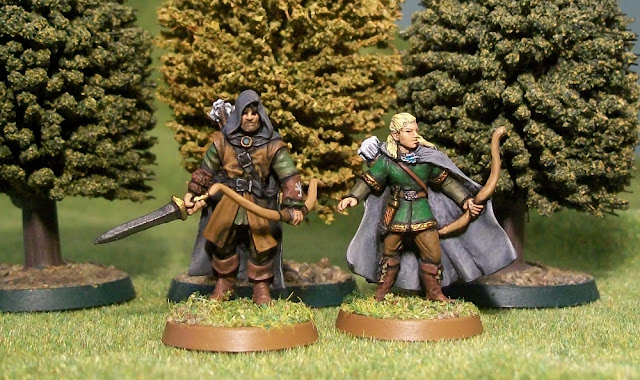