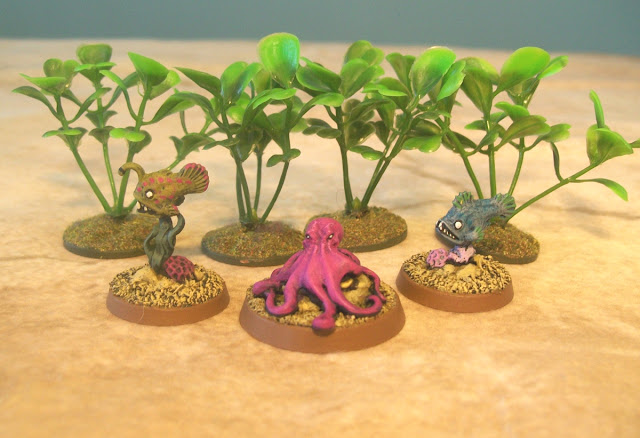 Many months ago, I noticed that Reaper miniatures had released a new ‘zombie shark’ figure, and I wanted one. I just couldn’t quite figure out how I would use it. I began to think of various ways I could cut the figure to get it ‘half on the surface’ so I could use in Ghost Archipelago games, but the more I thought about it, the more it just seemed like too much effort. Plus, I’d probably just end up destroying the figure in the process.

Then one day it occurred to me that if a scenario was set under the water, I wouldn’t have to cut the miniature, I’d just need to mount it on some kind of base. Of course, if I did that, I would need a bunch of other undersea creatures…and some new terrain…and a new mat…and new rules…

And so I set-off on a new miniature project. Oddly, I didn’t start by buying the zombie shark. Instead, I bought a pack of ‘vicious fish’. I figured this would be the best way to start my undersea bestiary, as they are sort of the ‘lowest common denominator’ monster, in the same way that skeletons are in Frostgrave. Anyway, this pack really let me go crazy with the colours, which is a nice change, as most of the figures I tend to paint are more on the drab side. 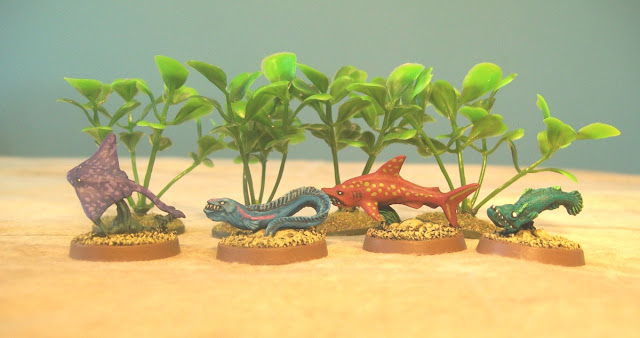 I also painted up a couple of Frostgrave magmites which I’m going to use as bottom-feeding creatures. 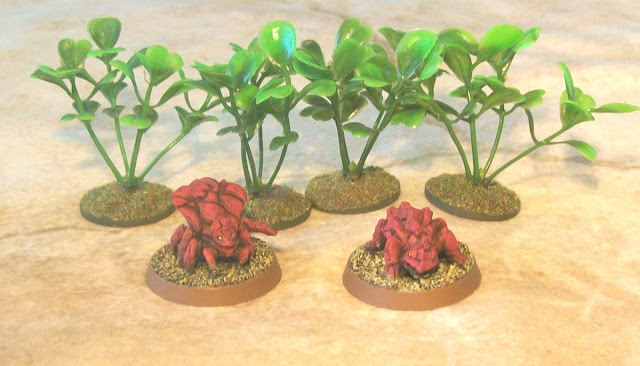 I got a new mat from Cigar Box battles. After a good bit of thought, and much consultation with my team of gaming experts, I decided to go with a desert mat, which is serving as the base for the photos. This is somewhat ironic, a desert mat, serving as the base for undersea adventures, but I figure in the clear waters of the Ghost Archipelago, it’ll make a great sandy bottom, especially once I decorate it with some cool terrain.

Now, I must admit, the virus has somewhat interrupted my plans, and I’m now more painting ‘whatever I’ve got’, than ordering new stuff at the moment. But I’ve got a few other undersea things to work on, and I’ll definitely continue working on this project!