War of the God Queen by David Hambling 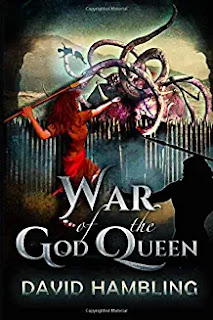 You don’t have to read The Dulwich Horror by David Hambling to understand and enjoy his new novel, War of the God Queen. But, as that anthology is excellent, and provides some interesting background and context to Hambling’s new novel, I highly suggest it. Here is my review of The Dulwich Horror.

For those that have already read it, or don’t plan to, read on…

Near the end of The Dulwich Horror, a band of Oxford graduates, living in London in 1927, take on the forces of Cthulhu. During that fight, one of the characters is swallowed up by the earth, and presumed killed. That is, the characters in the story thought she had died, and for that matter, so did I. I am very glad to learn that we were both mistaken.

War of the God Queen opens up with that young woman falling through time, back to some distant age, in some unknown part of the world, where nomadic tribesmen are engaged in a low-level war with cthuloid monsters.

What follows is less of a mythos story, and more of a very modern take on the early ‘planetary romances’ of Edgar Rice Burroughs and Robert E. Howard. I almost hate to conjure those two names, for their writing is so at odds with Hambling’s. Where both Burroughs and Howard write stories involving brawny heroes with super-human abilities, Hambling’s hero is a classically-educated, ‘modern’ Englishwoman of the 1920s. Sure, she is athletic, but she is no warrior.

Inevitably, our heroine gets drawn into the war as it is both escalating and potentially holds the key to her return to her own time. But, despite her obvious intelligence and breadth of knowledge, that knowledge holds no obvious secret weapons. She doesn’t know how to make gunpowder, or steam engines, and even if she did, the low, Bronze Age technology of the people around her couldn’t make use of it.

Thankfully, she is soon joined by another group of woman pulled from various points in time – all but one from her past. Again, none of these women know any devastating military secrets, but each bring the interesting skills of their time and place. And this is the central premise of the novel – how these women, using what knowledge and abilities they possess, manage to change the society they are thrust into. It is a war story about organization, logistics, and intelligence gathering. Sure, there is plenty of fighting, and some gruesome deaths, but these are generally of less importance than the ‘big picture’.

This approach really works with Hambling’s writing style. His is not the break-neck pace of Burroughs or Howard. Instead, he writes with a slower, more considered, more mature style. It reads as though it is written by an Englishwoman of the 1920s. While parring this style with a weird-military-horror story is not an obvious approach, it somehow works.  It easily held my interest for all of its 370 pages.

Did I enjoy War of the God Queen as much as The Dulwich Horror? No, not quite. But, I did thoroughly enjoy it. Not only is it an interesting story, with an intriguing cast of characters, but it felt different from any of the ‘weird fiction’, I have read before, and that’s not an easy feat to manage these days. David Hambling is a skillful wordsmith, who I'll be keeping an eye on!