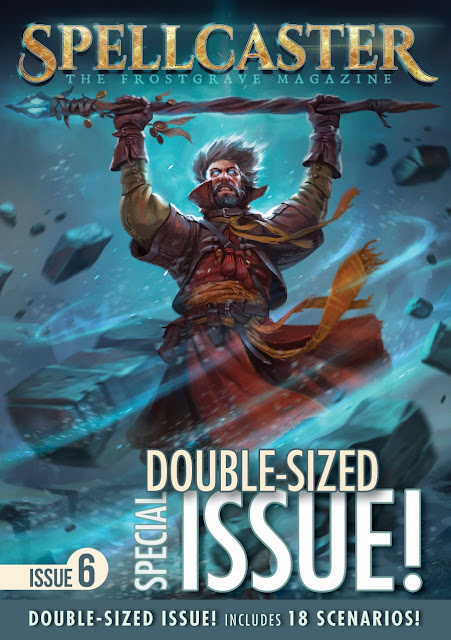 Need some new Frostgrave scenarios to play? Need some new solo material to try out? Need giant tortoises? You are in luck. The new issue of Spellcaster contains all of that and more.

It is currently available as a PDF from DriveThruRPG. Print-on-demand will hopefully follow soon, but may take a bit longer in these uncertain times.

* Swords Against the Slime Lord – A 4-scenario Frostgrave mini-campaign.
* The Frostgrave Immersion Tour pack – including 6 unique scenarios.
* Standing in the Eye – A one-off Frostgrave scenario.
* Warriors of Athena - Using the Frostgrave rules for playing solo Greek Myth games, including 2 scenarios.
* The Witch of Mount Gramos – A 3-scenario mini-campaign for Warriors of Athena.
* Giant Tortoises in Ghost Archipelago – Rules for mounts and pack tortoises as well as a solo scenario.
* Eye Demons in Frostgrave – Rules for eye demons, plus a new scenario
Posted by joe5mc at 00:15