The End of an Era (and a hobby knife) 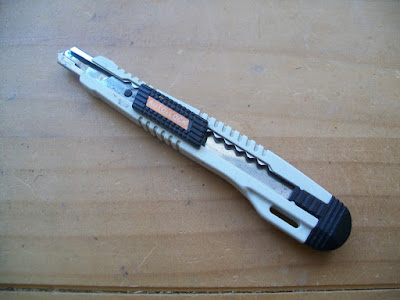 I’m not a man who gets overly sentimental about objects. (I save that for people and places). But, the other day, when I realized I was down to the very last blade of my hobby knife, I realized it was the end of an era. You see, this American Line Auto-lock knife is the last of five that have trimmed my miniatures, cut my card and paper, opened my boxes, and travelled with me for the last 20 years…

It was near the end of the 1990s. I had graduated university, and like so many others, I had very little idea what to do with the rest of my life. So, I moved back in with parents and signed up with a temp agency. The agency assigned me to work in the Inventory Control department of a commercial airline inspection and repair facility out by the city airport. It was probably the most boring job I have ever had. I did about an hour of filing every day, and that was it. Often, I sat a desk that didn’t even have a computer, so I had nothing to entertaining me except a notebook I brought with me or a book I sneakily read. It was an amazing example of the collective laziness of the other 5 people in the department who couldn’t be bothered to do their own 15 minutes of filing a day, and the gullibility of the manager who apparently thought they were overworked.

Looking back, I probably should have said something, or asked for more work, but it was my first real experience working in an office environment – and there were free Krispy Kreme donuts every Friday (Inventory Control shared the office with the buyers…).

One of the older guys in the department took a liking to me, and occasionally, when he had to go down into the warehouse to physically check on some inventory, or recover a piece to send to another plant, he would invite me a long. The best part of this was that we got to walk through the giant hangers where guys were working on the planes. It was amazing to see them crawling over them like little ants, welding, cutting, and all. My friend used to be one of the mechanics before an injury landed him a desk job, and it was clear he missed it. We used to chat about how each mechanic has his own personal tool box – many of which looked more like wardrobes on wheels than ‘boxes’. I told him about my wargaming hobby, and how it would be cool to have one of those tool boxes to hold all my paints and tools, etc. 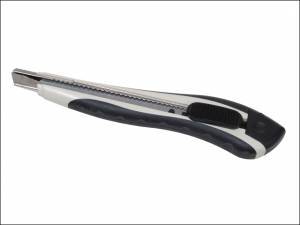 One day, as I finally neared the end of this employment-purgatory, my friend took me back into the inventory shelves. He asked if I had any use for a box cutter. I said I used them all the time. He reached into a bin, pulled out five of them, and gave them too me. I suppose he knew very well that these small items were not inventoried, and I was too naïve to do anything but except them with a smile.

As you might expect for tools that are used on commercial airliners, these knives were of seriously high quality. I have delighted in their use for over two decades. Thankfully, it does appear that they can be ordered from special tool places in the UK, and they aren’t even particularly expensive. The design has changed significantly, but hopefully they have maintained their quality over the last twenty years. I think I’m going to have to find out…

Apparently, I'm just an idiot. After it was pointed out on face book, I opened up the back and discovered two more complete blades contained within...as well as the tool for snapping off the blades safely. Well, this comes from being given a tool without any instruction in its use! I morn for the four I discarded with their extra blades still hidden within, but at least I'm the wiser!