Ride of a Lifetime by Robert Iger 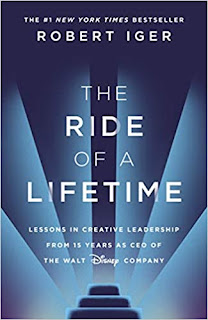 The libraries in England are still closed, but, at least here in Kent, you can still get books. You have to request them online and then wait for a scheduled pick-up time – but hey, it’s better than nothing. This is important to me as there are a lot of books that I would like to read but know that I’m unlikely to want to keep. Such was the case with Ride of a Lifetime by Robert Iger.


Robert Iger has been the CEO of Disney since 2005 and is responsible for the acquisition of Pixar, Marvel, Lucas Films, Fox and the creation of Disney+. Although this book is billed as ‘Lessons in Creative Leadership’ as it says in the subtitle, I read it more as Iger’s ‘business autobiography’.

The book is well-written, well-paced, and overall it’s a fascinating read. The first third of the book is about his work at ABC and his rise to the top of that company. Then, when Disney buys out ABC, he slowly rises within Disney. There is a long section on how he became CEO after the forced departure of the former CEO Michael Isner. Finally, the book goes through each of the acquisitions mentioned above, one-by-one. I admit, this was my favourite part of the book as these are companies I’m interested in to a greater (Marvel / Lucas Films) or lesser (Fox) extent. Its fascinating to hear how each of those deals went down and how different each of the former owners of those companies approached the negotiations. Each one of them is a true ‘character’.

Probably the most interesting for me, though it only takes up a short part of the book, was the sale of Lucas Films. In this case, its really is one ‘creative’, George Lucas, selling the products of his creation. Something that echoes greatly with me.

Obviously, such a book offers a severely biased view of these events, but what first-hand account is without bias? That’s not to say that Iger claims to be perfect or faultless, and he does admit to several mistakes, but he certainly paints himself in a good light. (I otherwise know nothing about the man so I offer no opinion on his character).

It’s a fast read and worth picking up if you are interested in such things.