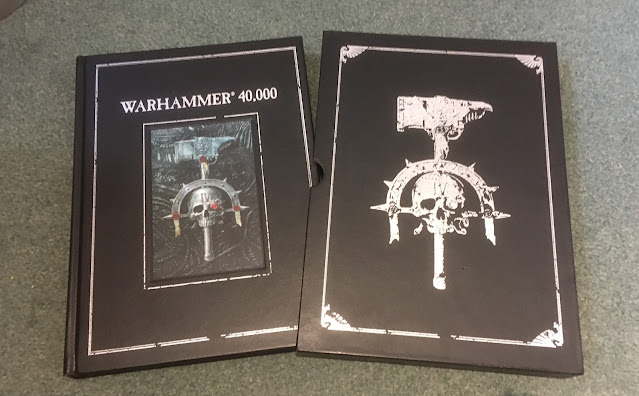 I have recently been reading through the Warhammer 40,000, 4th Edition Rules. Partly this is because I’m currently building a ‘Lost and the Damned’ army, using the 4th Edition as a rough guide, but mainly because I happen to own a really pretty copy of these rules!

Warhammer 40,000 released its forth edition in 2004. I was in 27 or 28 at the time and working weekends at the legendary Dream Wizards gaming store in Rockville, Maryland. I wasn’t a big 40K player, even then, but I enjoyed painting the figures and reading White Dwarf, and knowledge of the game was important for maintaining a good rapport with many of the customers. 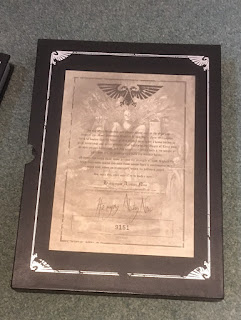 When 4th Edition came out – it was a big deal! The store had ordered a huge number of copies, and I figured I would pick one up. Then Doug, who was my manager at the time, showed me the deluxe limited-edition copy of the rulebook. It was beautiful – faux leather with a matching slipcase highlighted with silver leaf. The book itself had sliver edging on the pages.

It was expensive – even with my employee discount, but Doug told me ‘You are going to want one of these.’ He was right. I mean, even then I was a bibliophile, and this was the prettiest gaming book I had ever seen.

Well, nearly twenty years later, I’ve still got the book. It even made the trip over the ocean with me.

I’m not saying that 4th Edition is an especially good or bad version of 40K, though you can certainly have a fun game using the rules. I’m reading the book for nostalgia, because it is well-written, because it has fantastic artwork, and as an encouragement to keep working on my Lost and the Damned army. I’m reading it because I like the way the faux leather feels on my fingers.

Another amazing thing about this book. At the time I bought it, I had no idea I would ever live in the UK, and Games Workshop itself seemed a kind of mystical, faraway place. Now, as I look over the list of contributors to this book, I’m astounded by the number of people who worked on this book that I have since met in a professional capacity, mostly through my work at Osprey.

On one level, buying a ‘Deluxe Edition’ of a rulebook is kind of silly, as they are likely to be replaced or outdated at some point. For example, this book has been supplanted by 5 later editions, but, at least in this case, I’m sure glad Doug talked me into it. 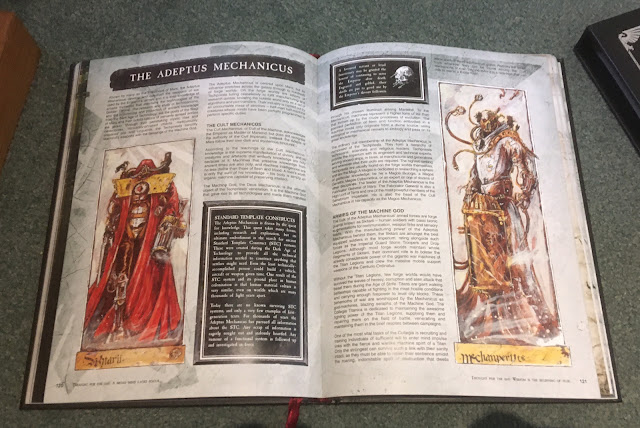